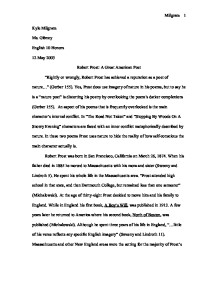 Robert Frost: A Great American Poet&quot;Rightly or wrongly, Robert Frost has achieved a reputation as a poet of nature...&quot; (Gerber 155). Yes, Frost does use imagery of nature

Kyle Milgram Ms. Gibney English 10 Honors 12 May 2003 Robert Frost: A Great American Poet "Rightly or wrongly, Robert Frost has achieved a reputation as a poet of nature..." (Gerber 155). Yes, Frost does use imagery of nature in his poems, but to say he is a "nature poet" is distorting his poetry by overlooking the poem's darker complexions (Gerber 155). An aspect of his poems that is frequently overlooked is the main character's internal conflict. In "The Road Not Taken" and "Stopping By Woods On A Snowy Evening" characters are faced with an inner conflict metaphorically described by nature. In these two poems Frost uses nature to hide the reality of how self-conscious the main character actually is. Robert Frost was born in San Francisco, California on March 26, 1874. When his father died in 1885 he moved to Massachusetts with his mom and sister (Sweeny and Lindroth 5). He spent his whole life in the Massachusetts area. "Frost attended high school in that state, and then Dartmouth College, but remained less than one semester" (Michalowski). At the age of thirty-eight Frost decided to move him and his family to England. While in England his first book, A Boy's Will, was published in 1913. A few years later he returned to America where his second book, North of Boston, was published (Michalowski). ...read more.

The man also says that when his horse rings its bells he thinks that the horse is asking, "What are you waiting for?" Again the horse isn't really asking this. The man is afraid to take responsibility for his thinking so he portrays his concerns through the horse. In the third and final part of the poem, the dark lure of the woods, which represents death, tries to persuade the man into staying in his neighbor's woods. The man reminds himself of his commitments he has in life (De Fusco 96). He realizes that he has "promises to keep" and "miles to go before he sleeps". These promises and miles to go refer to life and all that he has to live for and sleeping refers to death (Sweeny and Lindroth 51). He is so worried about what other people think of him and his actions that he almost resorts to killing himself. However, he finally realizes his life goals are more important than what people say about him and the nature described in the poem pulls him out of the darkness and into life. His self-conscious feelings of wanting to live override the feelings about death. It becomes clear that the nature in the poem is about more than tall trees, pretty flowers, and sparkling snowflakes (Gerber 161). ...read more.

Making choices is a difficult process. One needs to be clear on the messages from one's conscious so that a person can make the right and comfortable choice for oneself. Although both poems tell a story in which the main character struggles with inner conflicts, the two stories have different endings. Although, Richardson feels that in "The Road Not Taken" the two roads are the same, they are actually completely different. The traveler takes the road that others don't take. He overcomes his self-consciousness and makes his own decision. He chooses to be a leader not a follower. In " Stopping By Woods On A Snowy Evening" the man returns home and listens to his conscious. He succumbs to his horse's "thoughts" which are really his own and chooses to come out of the woods or darkness, see the light and chooses to live life to it's fullest. Robert Frost is a very interesting poet. His use of symbolism is extraordinary, and his life's messages are meaningful. It is important to be able to listen to one's own conscious while making decisions throughout life's process. At the age of eighty-nine on January 29, 1963 Robert Frost died. Frost will always be a great American poet. "His many poems have been different from one another and yet alike" (Van Doren). Now and forever Frost will remember him as a major American poet (Sweeny and Lindroth 15). ...read more.