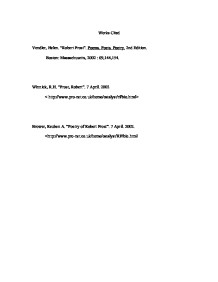 Works Cited Vendler, Helen. "Robert Frost". Poems. Poets. Poetry. 2nd Edition. Boston: Massachusetts, 2002 : 69,144,154. Winnick, R.H. "Frost, Robert". 7 April. 2002 < http://www.pro-net.co.uk/home/catalyst/rf/bio.html> Brower, Reuben A. "Poetry of Robert Frost". 7 April. 2002. <http://www.pro-net.co.uk/home/catalyst/RF/bio.html Robert Frost By 8731 Mrs. Rogers 04/19/02 Robert Frost can be described as one of America's major poets. A person with a great deal of achievements and talent. A sophisticated poet, that used his literary talent to transmit his knowledge and approach towards life and nature to others. Some of the most common and admired poems by his readers were "The Road not Taken", " Stopping by the Woods on a Snowy Evening", and "Mending Wall". Poems that have increased his popularity nationwide, and have caused a major impact in the poetic and literary world. Increasing his audience and soon leading to his grand achievements. Poems such as these have left and given people a sense of thought, in a way teaching something new or by which many can relate to or identify themselves by. Robert Frost is known as one of America's leading 20th-century poets, being a Four-time winner of the Pulitzer prize.(Winnick 1). Born to Isabelle Moodie and William Frescott Frost Jr on March 26 1874. ...read more.

The purpose of this poem was to express what Robert feels towards life, responsibilities and struggles, "promises to keep", things to be accomplished. Life is a fight to live and achieve in which we sometimes feel we have to many things to do before we sleep or die. In the poem a "Mending Wall" the speaker of this poem is a neighbor. He wishes to know why there should be a wall separating him from his neighbor, if he feels there isn't any reason that a wall is needed to protect each other from. "Isn't it where there are cows? But there are no cows." However all the neighbor responses is "Good neighbors make good friends"(line 27). Because there is a reason for the wall, it is to keep the neighbor out, this means that good distance between neighbors leaves no space for discussions or misunderstandings. Therefore they are good neighbors, and the wall makes sure that the separation is between them keeping them from each other, and preventing them from becoming bad neighbors. Roberts Frost tone in this poem is that of confusion, trying to understand. An example of this can be line 30 "why do they make good neighbors? ...read more.

I know these woods their owner too, I feel I watching them some fear, I sense my little horse's rue, Pausing without a farmhouse near. I hear his harness bells now shake In wonder at my strange mistake. I hear the sound of falling snow, All easy wind and downy flake. I love the woods so dark and deep, But I have promises to keep, And miles to go before I sleep, And miles to go before I sleep. The Road Not Taken Two roads diverged in a yellow wood, And sorry I could not travel both And be one traveler, long I stood And looked down one as far as I could To where it bent in the undergrowth; Then took the other, as just as fair, And having perhaps the better claim, Because it was grassy and wanted wear; Though as for that the passing there Had worn them really about the same, And both that morning equally lay In leaves no step had trodden black. Oh, I kept the first for another day! Yet knowing how way leads on to way, I doubted if I should ever come back. I shall be telling this with a sigh Somewhere ages and ages hence: Two roads diverged in a wood, and I- I took the one less traveled by, And that has made all the difference. ?? ?? ?? ?? ...read more.