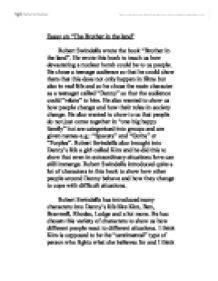 Essay on "The Brother in the land" Robert Swindells wrote the book "Brother in the land". He wrote this book to teach us how devastating a nuclear bomb could be to us people. He chose a teenage audience so that he could show them that this does not only happen in films but also in real life and so he chose the main character as a teenager called "Danny" so that the audience could "relate" to him. He also wanted to show us how people change and how their roles in society change. He also wanted to show to us that people do not just come together in "one big happy family" but are categorised into groups and are given names e.g.: "Spacers" and "Goths" or "Purples". ...read more.

All of these characters are set in "Skipley" but I think it is supposed to be Shipley in N.West Lancashire. I think this was done to show us what would happen to a town like ours because we know what it's like to live in that kind of weather and climate. This is done so we could relate to the weather and the feelings of the northwest area. All this is tied around a plot in which Danny is trying to cope with the devastation from the nuclear bomb. The plot is fixed around Danny trying to keep alive take care of Ben and Kim and still cope with the death of both his parents. Danny's mum was killed very soon in the book while his dad tried to keep himself together but he died shortly afterwards. ...read more.

Also by reading this book the reader should realise all that he has and all that he could lose even if he/she takes that thing for granted e.g.: clean water, food, TV, school, transport, lots of people, etc. And the audience is supposed to realise that if there were no TV, food, clean water and all of the rest of it, it would be so hard to cope with all the things that have happened. This book would make the reader realise how lucky he really was, even if he didn't realise it at first. This would also encourage the reader to make the most of what he has and What he could lose even if he didn't even realise he had it. By Mosan Elahi 9R6 ...read more.