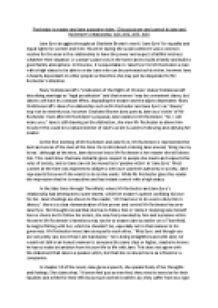 'Rochester is master and Jane a passive victim.' Discuss power and control in Jane and Rochester's relationship.

﻿?Rochester is master and Jane a passive victim.? Discuss power and control in Jane and Rochester?s relationship. AO1 AO2, AO3, AO4 Jane Eyre struggles throughout Charlotte Bronte?s novel, ?Jane Eyre? for equality and equal rights for women and men. However during the social context it was a common routine for the man in the relationship to have the power and expect a faithful mistress whatever their situation. A woman?s place was in the home and to build a family and build a good family atmosphere. In this view, it is expectable in ?Jane Eyre? for Mr Rochester a man with a high status to be able to order Jane who can be portrayed as his victim, however Jane is heavily dependant on other people so therefore she may just be desperate for Mr Rochester?s attention. Mary Wollstonecraft?s ?Vindication of the Rights of Women? states Wollstonecraft describing marriage as ?legal prostitution? and that women ?may be convenient slaves, but slavery will have its constant effect, degrading the master and the abject dependent. Mary Wollstonecraft?s idea of a relationship such as Mr Rochester and Jane Eyre?s as ?slavery? may not be entirely true, however Charlotte Bronte does portray Jane as a ?victim? of Mr Rochester. ...read more.

In the later time through Thornfield, where Mr Rochester and Jane Eyre?s relationship had developed to some extent, while her master?s speech confiding his love for her. Jane?s feelings are shown to the reader, ?All I had now to do was to obey him in silence,? there is a clear demonstration of the power and control Mr Rochester has over Jane Eyre. Her thoughts reveal that she has to follow him in ?silence? implying Jane herself has no choice but to follow his orders, she may feel provoked by him and a passive victim. However Mr Rochester?s intentions may not be to master Jane as earlier on in Thornfield, he begins flirting with her, which he shouldn?t be, especially not in that manner to his governess. Mr Rochester views Jane as equal to each other, ?Miss Eyre: and though you are not pretty any more than I am handsome,? he is being straightforward with Jane, he would not talk in an honest manner to someone the same class or higher, maybe he knows he has to make a transition from his own life to life with Jane. ...read more.

During the proposal of Mr Rochester to Jane, Jane?s thoughts is that she is uncontrollable for her words which come out, ?for my voice was not quite under command,? Jane, herself states that she is not in control of her thoughts and feelings as Mr Rochester has power over her. The idea of Jane being a passive victim is shown here, however Jane was out of control for her feelings towards Mr Rochester, therefore she may like the attention she gets from him and the idea of pleasing him makes her happy. When Jane finds out about Bertha and the lies Mr Rochester has told her, Jane decides to leave, this was her own choice showing that Mr Rochester does not have full control over her and that she chooses to follow him if she wishes. In conclusion, I believe that the statement, ?Rochester is master and Jane a passive victim,? is not true to some extent. Throughout the novel, there are hints to support this statement however Jane is shown to be an outspoken woman who gives outbursts of her thoughts. She follows and obeys Mr Rochester as he is her master, throughout the novel Jane is heavily dependant on other people therefore she may find pleasure in Mr Rochester?s attention. ...read more.