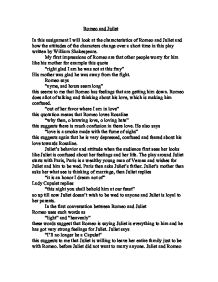 Romeo and Juilet In this assignment I will look at the characteristics of Romeo and Juliet and how the attitudes of the characters change over a short time in this play written by William Shakespeare. My first impressions of Romeo are that other people worry for him like his mother for example this quote "right glad I am he was not at this fray" His mother was glad he was away from the fight. Romeo says "ayme, sad hours seem long" this seems to me that Romeo has feelings that are getting him down. Romeo does allot of talking and thinking about his love, which is making him confused. "out of her favor where I am in love" this quotation means that Romeo loves Rosaline "why then, o brawing love, o loving hate" this suggests there is much confusion in there love. He also says "love is a smoke made with the fume of sighs" this suggests again that he is very depressed, confused and feared about his love towards Rosaline. ...read more.

Juliet changes after she meets Romeo. Juliet is defiant she tricks her mother by making her believe she is upset over her cousin when she is pely upset over not being able to see Romeo. Juliet argues with her parents over marriage, her parents lose there temper with her and her father says "disobedient wretch" then he also tells her she might be kicked out if she doesn't marry Paris. Then all Juliet's last resorts turn her down she then goes to the nurse who is like a mother to Juliet and the nurse agrees with her father. She then goes to her last hope the priest who helps Juliet. Since the priest try to help Juliet. Juliet and the priest come up with a plan. The priest would use his herbs to make a drink than would make Juliet to seem dead, after that Juliet would wake up in the tomb far outside Verona and meet Romeo. The priest tried to warn Romeo of the plan but by the time the message got three a friend of his had already told him. ...read more.

Just like the secret marriage and his love for Rosaline and his killing. Romeo is selfish proven in this quote "they may seize on the white wonder of dear Juliet's hand" he wants her for himself he also feels self pity "be merciful, say death" this proves that banishment not seeing Juliet hurts far more than death. Shakespeare makes this play very believable. He also makes the characters of the play realistic and believable. In this play Shakespeare develops the play very fast over just a few days in the play. His development is very good because Shakespeare shows the characters at the key points throughout the play that shows that change. The Shakespeare ends with a good ending that grabs the audience by surprise. The combination of this play with todays technology has made a very good film. Even after 200 years this play still keeps up with modern script writing and is inspiration for many writers. Shakespeare creates tension by making so many what ifs in the play so the audience are going well I wonder what would of happened if this happened. by doing this is what make Shakespeare a great writer of the present and the past times. ...read more.