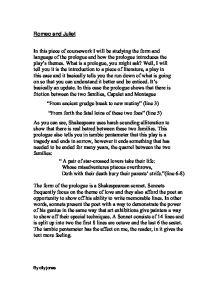 Romeo and Juliet In this piece of coursework I will be studying the form and language of the prologue and how the prologue introduces the play's themes. What is a prologue, you might ask? Well, I will tell you it is the introduction to a piece of literature, a play in this case and it basically tells you the run down of what is going on so that you can understand it better and be enticed. It's basically an update. In this case the prologue shows that there is friction between the two families, Capulet and Montague "From ancient grudge break to new mutiny" (line 3) "From forth the fatal loins of these two foes" (line 5) As you can see, Shakespeare uses harsh sounding alliteration to show that there is real hatred between these two families. This prologue also tells you in iambic pentameter that this play is a tragedy and ends in sorrow, however it ends something that has needed to be ended for many years, the quarrel between the two families: " A pair of star-crossed lovers take their life: Whose misadventures piteous overthrows, Doth with their death bury their parents' strife."(line 6-8) ...read more.

that shows hostility between the two families. It shows that the feud has lasted for many many years so therefore it must be a large issue: "And the continuance of their parents' rage," (line 10) Every one of these quotes has an affect on me because they all have strong words, which gives real meaning. You can almost feel the hatred between these two families. The main themes expressed in the prologue are love & hate and fate & freewill. The beginning of the octave is set with hatred, "Where civil blood makes civil hands unclean:" (line 4 ) The octave also tells us that it was Romeo and Juliet's love and death that ended this feud: "Doth with their death bury their parents' strife." (line 8) Verona is a society full of hatred and in Act one Scene one it is shown: this quote is extracted from act one scene one in line 19 and is said by Gregory this line is thrusted towards the Montague's. "The quarrel is between our masters, and us their men." "What, drawn and talk of peace? ...read more.

what they try and do like if Juliet had woken up earlier or if the letter had reached Romeo quicker even if there families weren't in conflict then there whole lives would be different but this is not the case. Shakespeare puts lines in the prologue to show that there is fate: "A pair of star-crossed lovers take their life:" (line 6 pro') "The fearful passage of their death-marked love" (line 9 pro') so as you can see Shakespeare shows us that they are fated to die as early as the prologue. The prologue is in a Shakespearean sonnet, and introduces the themes of the play to you so that you have an understanding of what is going on. The themes are fate and freewill, this play is also a tragedy if you haven't already worked it out. The prologue is also there to get your attention and give you a quick brief so then you are interested and carry on reading I would personally recommend you to read this play as it is very good. ?? ?? ?? ?? By olly jones ...read more.