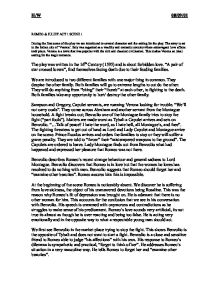 ROMEO & JULIET ACT 1 SCENE 1 During the first scene of the play we are introduced to several character and the setting for the play. The story is set in the Italian city of 'Verona'. Italy was regarded as a wealthy and romantic country where extravagant love affairs took place. Verona is a town that was popular with the rich and classical civilisation. This makes Verona an ideal setting for the tragic romance. The play was written in the 16th Century (1595) and is about forbidden love. "A pair of star crossed lovers", find themselves facing death due to their feuding families. We are introduced to two different families with one major thing in common. They despise the other family. Both families will go to extreme lengths to out do the other. They will do anything from "biting" their "thumb" at each other, to fighting to the death. Both families take any opportunity to hurt/ destroy the other family. ...read more.

Benvolio suggests that Romeo should forget her and "examine other beauties". Romeo assures him this is impossible. At the beginning of the scene Romeo is noticeably absent. We discover he is suffering from love sickness, the object of his unanswered devotions being Rosaline. This was the reason why Romeo's fit of depression was brought on. He is adamant that there is no other woman for him. This accounts for the confusion that we see in his conversation with Benvolio. His speech is crammed with oxymorons and contradictions as he struggles to make sense of his predicament. Romeo's love sounds very artificial, its not true its almost as though he is over reacting and being too false. He is acting very emotionally and in the opposite way to what a respectable young man should act. We first see Benvolio in the market place trying to stop the fight. This shows Benvolio is the opposite of Tybalt and does not want to start a fight. ...read more.

This shows him to be a comic figure in the play (Shakespeare wanted his plays to be humorous and make the audience laugh and jeer) especially when his wife remarks he would be better off with " a crutch". The Prince Escalus is a victim of circumstance; he is always just too late to do anything. He is plainly angered by the families feud yet lacks the strength to reconcile their differences. After the third "civil brawl" the prince threatens Capulet and Montague with their "lives". The prince has no real power in the city and finds it hard to stop the families fighting. The families are becoming a major problem in the city and are disturbing everyday life, and injuring innocent people. So far in the play we have been introduced to two rival families. Whose goals are to become the most important family in Verona and destroy the other family. The first family being the Montagues (Lord Montague, Lady Montague. Romeo, Abraham, Balthasar and Benvolio) and the other the Capulets (Lord Capulet, Lady Capulet, Juliet, Sampson, Gregory and Tybalt). H/W 08/09/01 ...read more.