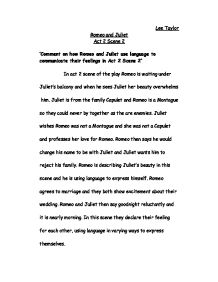 Lee Taylor Romeo and Juliet Act 2 Scene 2 'Comment on how Romeo and Juliet use language to communicate their feelings in Act 2 Scene 2' In act 2 scene of the play Romeo is waiting under Juliet's balcony and when he sees Juliet her beauty overwhelms him. Juliet is from the family Capulet and Romeo is a Montague so they could never by together as the are enemies. Juliet wishes Romeo was not a Montague and she was not a Capulet and professes her love for Romeo. Romeo then says he would change his name to be with Juliet and Juliet wants him to reject his family. Romeo is describing Juliet's beauty in this scene and he is using language to express himself. Romeo agrees to marriage and they both show excitement about their wedding. Romeo and Juliet then say goodnight reluctantly and it is nearly morning. In this scene they declare their feeling for each other, using language in varying ways to express themselves. Romeo uses the metaphor 'It is the East, and Juliet is the sun' which is just describing her beauty. Romeo wants Juliet to lose her virginity to him and he extends the metaphor a he describes the moon 'already sick with grief' which has a duel meaning Roseline who was Romeo's previous girlfriend is sick with her sister Juliet's beauty and the moon is also symbolising virginity. ...read more.

Juliet then talks about the danger of Romeo being at her house ' and place of death, considering who thou art, if any of my Kinsmen find thee here' this create tension and contrasts the element of danger with love. Romeo uses the metaphor ' with love's light wings did I o'erperch these walls' showing his emotions are so powerful he feels he can fly. Romeo then says ' Alack, there l ies more peril in thine eyes than twenty of their swords' suggesting that he is not scared of being killed but he is more worried about rejection from Juliet. Romeo uses this comparison to show how much he loves Juliet. Romeo then says 'adventure for such merchandise' in Juliet were as far away as 'that vast shore washed with the farthest sea' which just says he would do anything to be with Juliet. Juliet says. "..a maiden blush bepaint my cheek for that which thou hast heard me speak tonight". This tells us that Juliet is embarrassed, as she knows that Romeo was listening to her. She also says. "Fain would I dwell on form, fain, fain deny what I have spoke, but farewell compliment". This means that she does not want to waste time with conventional courtship. ...read more.

Romeo uses the simile 'love goes toward love as schoolboys from their books, but love from love, toward school with neavy looks' which is comparing them being naturally together and it is hard but it is painful to be separated. Romeo describes the sound of lovers 'how silver sweet sound lovers' as precious music. Juliet describes their relationship and compares herself to a wanton and Romeo to her bird. Juliet does this as she thinks she has the power to control Romeo by it. Juliet uses a paradox ' yet I should kill thee with much cherishing' which means that Juliet loves Romeo so much that here love overpower him and kill him which does happen in the end. Both Romeo and Juliet in this scene used a variety of ways to communicate using language. Romeo and Juliet use a range of imagery in the scene including similes and metaphors. They both use references to nature to explain their emotions and they do this because they feel it is pure, beautiful and natural. Romeo and Juliet describe love as a physical experience, not just emotional because they believe that their love totally engulfs them and they want to commit to themselves entirely. Romeo then agrees to marriage and leaves Juliet reluctantly and it is nearly morning. ...read more.