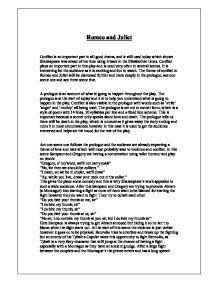 romeo and juliet.Conflict plays an important part in this play and is used very often in several scenes

Romeo and Juliet Conflict is an important part in all good drama, and is still used today which shows Shakespeare was ahead of his time using it back in the Elizabethan times. Conflict plays an important part in this play and is used very often in several scenes. It is interesting for the audience as it is exciting and fun to watch. The theme of conflict in Romeo and Juliet will be discussed further and more deeply in the prologue, ace one scene one and ace three scene five. A prologue is an account of what is going to happen throughout the play. The prologue is at the start of a play and it is to help you understand what is going to happen in the play. Conflict is also visible in the prologue with words such as 'strife' 'anger' and 'mutiny' all being used. The prologue is set out in sonnet form, which is a style of poem with 14 lines, 10 syllables per line and a fixed line scheme. ...read more.

into starting a fight as none of them want to be blamed for starting the fight however they do want to fight. They try to outwit each other "Do you bite your thumb at me, sir" "I do bite my thumb, sir" "I do bite my thumb, sir" "Do you bite your thumb at us, sir" "No sir, I do not bite my thumb at you sir, but I do bite my thumb sir" Here Sampson is always trying to get Abram annoyed but hiding it so he isn't to blame when the fight starts out. At the start of this scene the violence is just verbal however it goes on to be physical. Benvolio tries to interfere and break up the fighting but an enemy of his Tybalt a Capulet takes this opportunity to fight Benvolio, as Tybalt is a very fiery character that will jump at the chance of having a fight especially with a Montague as they have an ancient grudge. ...read more.

Speak not reply not, do not answer me!" In lord Capulet's speech lots of anger is exploded at once and his punctuation used is mainly commas and exclamation marks with him not resting to take a breath or give any one else a chance to speak. Lady Capulet agrees with her husband and thinks Juliet is the one in the wrong here. The audience would have also been on the parent's side here however this wouldn't be the case now. In Baz Luhrmans film this scene is a major part of the play and he has intensified it by lord Capulet getting so mad by the end he physically hits Juliet and I think this worked well in the film Conflict is a main theme in Romeo and Juliet with the conflict all happening because of love and hate. Both love and hate are important in the play because one would not be as effective without the other. Conflict is still used today as it is exciting to watch and Shakespeare was one of the first to use an take advantage of this. By Alex Flaherty ...read more.