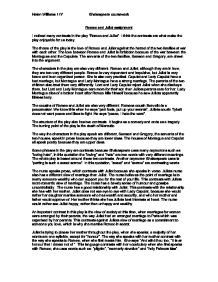 Romeo and Juliet assignment I noticed many contrasts in the play "Romeo and Juliet". I think the contrasts are what make the play enjoyable for us today. The theme of the play is the love of Romeo and Juliet against the hatred of the two families at war with each other. The love between Romeo and Juliet is forbidden because of the war between the Montagues and the Capulets. The servants of the two families, Samson and Gregory, are drawn into the argument. The characters in the play are also very different. Romeo and Juliet, although they are in love, they are two very different people. Romeo is very dependant and impulsive, but Juliet is very brave and is an organized person. She is also very practical. Capulet and Lady Capulet have a bad marriage, but Montague and Lady Montague have a strong marriage. The parents of the two children also treat them very differently. Lord and Lady Capulet reject Juliet when she disobeys them, but Lord and Lady Montague care more for their son than Juliets parents care for her. ...read more.

The nurse has a good relationship with Juliet. This contrasts with the relationship she has with her mother, Juliet does not see eye to eye with Lady Capulet, because she would rather her daughter marries someone who has wealth and security, and who her mother and father would approve of. Her mother thinks she has Juliets best interests at heart. The nurse would rather see Juliet happy, rather than unhappy and wealthy. An important contrast in this play is the view of society at this time, when marriages for women were arranged by their parents, the way Juliet had an arranged marriage to Paris which was organised by her parents. This contrasts against Juliets view of marriage as a commitment to someone you love, which is why she marries Romeo in secret. Juliet is trying to please her mother throughout the play, when she speaks; a majority of her words are one-syllable, except for "honour". The way she speaks with her mother contrast with the way she speaks to Romeo, when she first meets him. ...read more.

This is dramatic irony because the final scene Juliet wakes in the tomb to find Romeo dead, and a contrast between dreams and reality and life and death, as the messenger has come to tell Romeo that it is Juliet who is dead. The friar who advises Romeo is a contrast to the two families at war. He wants to join the two families by marriage, we see this when he says he would like to turn the two households "rancour into pure love", this contrasts with the view of the families. Shakespeares use of contrasts in "Romeo and Juliet" suits the play. I think the most effective contrast is the play beginning as a comedy and ending as a tragedy. Contrasts keep the audience interested as there are constantly new things happening. Along with a constant contrast in characters theme and mood we find ourselves facing a contrast of action. Changing the characters changes what's happening. For example when Tybalt enters there is fighting and when Romeo enters there is talk of love and a calm mood is set. Helen Williams 11Y Shakespeare coursework ...read more.