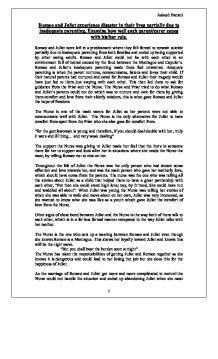 Romeo and Juliet experience disaster in their lives partially due to inadequate parenting. Examine how well each parent/carer copes with his/her role.

Juliet had to trust the Friar as it was the last chance for her to survive and she had to put her fate in his hands. She has this trust, as she knows he could help. The Friar had made a plan as a last minute action to keep Romeo and Juliet together as he knows how much they love each other and need each other to survive in this world. The plan consisted of many stages and must be followed exactly and if anything were wrong then would lead to the deaths of Romeo and Juliet. "Hold, get you gone, be strong and prosperous In this resolve; I'll send a friar with speed To Mantua, with my letter to thy lord" The last part of the plan is to get the letter to Romeo telling him all about the plan. The friar had taken a parental role of helping these two lovers to be with each other. Near the end where the plan had to be done perfectly or everything would go wrong, the Friar had ran away after seeing that Romeo had come too early and killed himself and the whole situation was a total disaster. The Friar wanted to protect his reputation and went off, "Saint Francis by my speed! ...read more.

Romeo and Juliet were star-crossed lovers and their only fall was fate. Fate is something, which they or nobody can control and led them to their eventual death. When Friar John could not deliver the message fate was the cause of this and the plan ended up going wrong. I believe that the most inadequate parent was Lady Capulet as she did not know how to show her love towards Juliet and did not know what Juliet wanted. She made Juliet feel unwanted and like no one was there for her to be looked out for. The Nurse was the main carer for Juliet and she was the only one who showed her love towards her and used her wisdom to look out for her. As soon as the situation got out of hand then the Nurse betrayed her and left Juliet on her own. Romeo's parents were not capable to look after him as they did not know what he wanted, leading him to go to the Friar. The Friar was the only person who cared and wanted to help Romeo. When the plan went wrong the Friar was left on a predicament as Romeo had come to early and he saw both of them dead, as he was afraid of the consequences and decided to run away and left them to lie. Aakesh Pattani 1 ...read more.