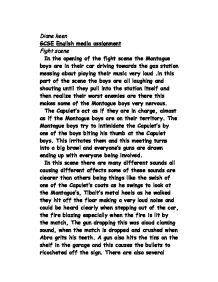 Diane keen GCSE English media assignment Fight scene In the opening of the fight scene the Montague boys are in their car driving towards the gas station messing about playing their music very loud .in this part of the scene the boys are all laughing and shouting until they pull into the station itself and then realize their worst enemies are there this makes some of the Montague boys very nervous. The Capulet's act as if they are in charge, almost as if the Montague boys are on their territory. The Montague boys try to intimidate the Capulet's by one of the boys biting his thumb at the Capulet boys. This irritates them and this meeting turns into a big brawl and everyone's guns are drawn ending up with everyone being involved. In this scene there are many different sounds all causing different affects some of these sounds are clearer than others being things like the swish of one of the Capulet's coats as he swings to look at the Montague's, Tibalt's metal heels as he walked they hit off the floor making a very loud noise and could be ...read more.

For example the Capulet's are very Spanish in their styling with there flowing leather coats, bright waist coats etc. this is also shown with the way Tybalt move whilst shooting and generally moving about the station. Also on the Capulet's waistcoats were very religious icons but apart from that there style of clothing was mainly black. In direct contrast the Montague boys were complete opposite dressing very casual and beach like suiting their location this included brightly colour Hawaiian style beach shirts and shorts. GCSE English media assignment Love scene In the opening of the love scene the Capulet's are having a party, sort of a live show it is very slow and romantic Romeo has taken a pill and feels a bit dehydrated so he decides to go to the bathroom whilst he is in the bathroom he notices a fish tank and starts to look at it in a bit closer detail, whilst looking into the tank he notices Juliet through the tank and it is love at first sight .the fish tank is made up of blue and yellow fish just like the colours of the cars in ...read more.

There are also lots of different types of shots involved in this scene for example there are lots of close ups, long shots, double headers and over the shoulder shots these are all used during some point of the scene. some where. As they give more dramatic or romantic feels to the scene fitting in perfectly. An example of a close up is in the lift where Romeo and Juliet share their first kiss and the camera circles them giving the illusion of it lasting longer. All of these different shots complete the scene and the dramatic features it needs are all included. These all help us to understand the scene better. There is a wide range of costumes in this scene all with a meaning and they seam to represent for example Romeo as Juliet's knight in shining armour and Juliet as his angel. In the scene they are both dressed very appropriately for each other but don't realise that their true love is their worst enemy. This is the first meting but what they don't realise is that it is also the beginning of the end. ...read more.