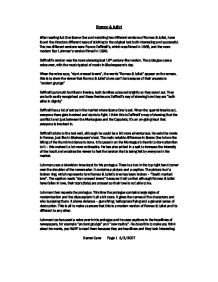 Romeo & Juliet After reading Act One Scene One and watching two different versions of Romeo & Juliet, have found the directors different ways of sticking to the original text both interesting and successful. The two different versions were Franco Zeffirelli's, which was filmed in 1968, and the more modern Buz Luhrman's version filmed in 1996. Zeffirelli's version was the more stereotypical 16th century-like version. The prologue uses a voice-over, with the music typical of music in Shakespeare's day. When the voice says, "start crossed lovers", the words "Romeo & Juliet" appear on the screen, this is to show the viewer that Romeo & Juliet's love can't be because of their ancestors "ancient grudge" Zeffirelli puts both families in liveries, both families coloured brightly so they stand out. They are both easily recognised and these liveries are Zeffirell's way of showing how they are "both alike in dignity" Zeffirelli has a lot of extras in the market where Scene One is set. When the quarrel breaks out, everyone there gets involved and starts to fight. I think this is Zeffirelli's way of showing that the conflict is not just between the Montagues and the Capulets; it's an on-going feud that everyone is involved in. Zeffirelli sticks to the text well, although he could be a bit more adventurous. He sets the movie in Verona, just like in Shakespeare's text. ...read more.

When the voice says "take their life", those words come up on the screen but the "t" also looks like a cross this again shows how the story of Romeo & Juliet relates to Jesus. When this appears on the screen the music reaches its climax to make the viewer intrigued and eager to continue watching. When in Luhrman's prologue he is introducing the characters he gives them the following names - "Fulgencio & Gloria Capulet" and "Ted & Caroline Montague". These aren't the names used in the original text and it is notable how the Capulet's names are Latin and the Montague's are WASP. I think Luhrman may be suggesting this "ancient grudge" was formed around religion - the Latiners against the WASP's. The film is set in "Verona Beach" which is one of Luhrman's many successful attempts at updating the action without ruining the plot by changing the text too much. The two families collide at a petrol station. Both families have the same "Sword 9mm" gun except he logos on the butt of the guns are slightly different - the Montague ones say "Montague" where the Capulet ones say "Capulet". The "Sword 9mm" bit is a way of sticking to the original text and means that when Benvolio says "Put up your swords" it still makes sense because the gun is a "Sword 9mm". ...read more.

When they are fighting, Captain Prince who is named Prince in the original text splits it up. There are no Princes in America nowadays so Luhrman has just updated the text. He tells them to drop their weapons and they do it immediately so right from the start he is seen as a figure of authority. He arrives in a helicopter so he has a demanding impact. The action then moves from the violent and noisy outside to the quiet and peaceful office of Captain Prince in the Police Station. Captain Prince enunciates the words "three civil brawls" and as he says it the camera moves form the Capulets, to the Montagues and then back to Prince - this re-enforces the language being used. The end of the scene is like a "cliff-hanger" because Captain Prince is so angry and he hasn't yet dealt with both parties properly yet. After studying these two versions of Romeo & Juliet, my personal preference was Buz Luhrman's version. I think he worked extremely hard at updating the settings, props etcetera and he kept the story line well. Zeffirelli didn't work as hard as Luhrman. As I said before, I feel that Zeffirelli was not adventurous enough, he kept to the text a bit too much but having said that, I'm sure Luhrman had aimed his version at teenagers like me whereas Zeffirelli was just out to turn Romeo & Juliet into a film. I now appreciate how much effort goes into making a film a lot more. Darren Cave Page 3 5/2/2007 ...read more.