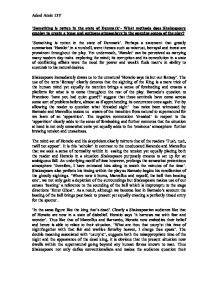 rotten in the state of Denmark

'Something is rotten in the state of Denmark'- What methods does Shakespeare employ to create a tense and ominous atmosphere in the opening scenes of the play? 'Something is rotten in the state of Denmark'. Perhaps a statement that greatly summarises 'Hamlet' in a nutshell, were themes such as mistrust, betrayal and incest are prominent throughout the play. Yet underneath, 'Hamlet' can be perceived as carrying many modern day traits exploring the mind; its corruption and its convolution in a state of conflicting affairs were the need for power and wealth fuels man's in ability to succumb to his natural desires. Shakespeare immediately draws us to the unnatural 'Horatio says tis but our fantasy'. The use of the term 'fantasy' clearly denotes that the sighting of the King is a mere trick of the human mind yet equally its mention brings a sense of foreboding and creates a platform for what is to come throughout the rest of the play. ...read more.

An underlying motif of time however, prolongs the somewhat pretentious atmosphere 'therefore, I have entreated him along to watch the minutes of the time'. Shakespeare also perfects his timing within the play as Barnado begins his recollection of the ghostly sightings. 'Where now it burns, Marcellus and myself, the bell then beating one', we not only gain a depiction of the surroundings but Shakespeare makes use of our senses 'beating' a reference to the sounding of the bell which is impromptu to the stage directions 'Enter Ghost'. As a result, although we become lost in Barnado's account the beating of the bell brings past back to present yet equally creating a perfectly timed entry for the specter . 'In the same figure like the king that's dead'. Clearly a Shakespearian audience like that of Horatio are now in a state of disbelief. ...read more.

The appearance of the King clearly reinforces the conflict as now the illusory sits against the reality. 'How now, Horatio/ is not this something more then a fantasy?' This has not only proved to be a private victory for Barnado against the educated Horatio yet is a confirmation of the fact that even 'fantasy' is able to exist within this warped reality. Horatio's description of the ghost 'such was the very armour when he the ambitious Norway combated', conveys the appearance of the King in his prime, yet the term 'battle' with Horatio's belief that 'this bodes some strange eruption to our state' suggest that its appearance will mean further troubles may ensue. It is ironic that the King should be dressed in battle gear for this theme of war mirrors the internal conflict between the present Hamlet and Claudius yet also Hamlet's eventual belief that Denmark should be handed over to the enemy for the true foes lie within. (no conclusion) ?? ?? ?? ?? Adeel Amin 13Y ...read more.