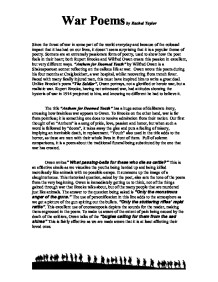 Since the threat of war in some part of the world everyday and because of the colossal impact that it has had on our lives, it doesn't seem surprising that it is a popular theme of poetry. Sonnets are an extremely passionate form of poetry, used to show how the poet feels in their heart; both Rupert Brooke and Wilfred Owen create this passion in excellent, but very different ways. "Anthem for Doomed Youth" by Wilfred Owen is a Shakespearean sonnet reflecting on the callous life at war. Owen wrote this poem during his four months at Craiglockhart, a war hospital, whilst recovering from trench fever. Faced with many fatally injured men, this must have inspired him to write a great deal. Unlike Brooke's poem "The Soldier", Owen portrays, not a glorified or heroic war, but a realistic war. Rupert Brooke, having not witnessed war, had attitudes showing the hysteria of war in 1914 projected to him, and knowing no different he had to believe it. The title "Anthem for Doomed Youth" has a huge sense of deliberate irony, stressing how brainless war appears to Owen. To Brooke on the other hand, war is far from pointless; it is something one does to receive admiration from their nation. ...read more.

once again getting the reader involved in the poem and possibly brings in Owen's own personal religious beliefs. It is answered that the only light present is the one reflected in the tears of families. Owen manages to shape the pace and tone of the poem by using harsh short words at the beginning of the poem to show anger, and later on in the second stanza, slows the pace of the poem by using longer rounded words, creating a mood of sorrow. The poet manages to project the image of a ghastly death. After being murdered the only call to mark the soldier's death is that of the guns. The poem ends with "And each slow dusk a drawing down of blinds". This could be taken as a metaphor, as the soldiers die, or a sign of respect show by the people at home. For the soldiers, when their fellow comrades die, they have no time to think about it, it is just seen as the end of another day, although it is the final dusk their friends shall see. Rupert Brooke's sonnet "The soldier" is very different to Owen's as it is an idealistic view on war. ...read more.

I find it interesting that both poets have used the form of a sonnet as it is usually associated with topics of love and passion; therefore I come to conclusion that Brooke felt very strongly about his country and was very patriotic. I like the way that Owen has used the sonnet form too, because this shows that he is crying out frantically, ahead of his time, that war is not, by any means, right. However there is genuine optimism in Brooke's poem, to him, it was an honour to fight for his country; it was an honour to die for your country. Out of both of these sonnets my favorite has to be "Anthem for Doomed Youth" by Wilfred Owen. I like the way that he includes the reader in the sonnet from the very start. I also can relate to Owen's poem and I find it more thought provoking as I can't even begin to be in agreement to Brooke's reasoning behind "The Soldier", but this does shows me the attitude cultivated from the home front. With both of these sonnets, being so different, it brings me to a thorough understanding of both backgrounds and attitudes. The contrast between Owen and Brooke allows the reader to see the reality of the First World War from two totally different perspectives. War Poems by Rachel Taylor ...read more.