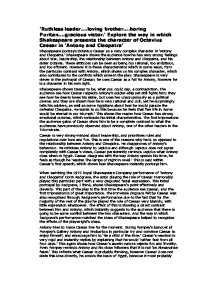 'Ruthless leader....loving brother....boring Puritan....gracious victor.' Explore the way in which Shakespeare presents the character of Octavius Caesar in 'Antony

'Ruthless leader....loving brother....boring Puritan....gracious victor.' Explore the way in which Shakespeare presents the character of Octavius Caesar in 'Antony and Cleopatra' Shakespeare portrays Octavius Caesar as a very complex character in 'Antony and Cleopatra.' Shakespeare shows the audience how he has very strong feelings about War, leadership, the relationship between Antony and Cleopatra, and his sister Octavia. These attitudes can be seen as being too rational, too ambitious, and too efficient. However it is these characteristics which in some ways, form the particular contrast with Antony, which shows us his complex character, which also contributes to the conflicts which arise in the play. Shakespeare is very clever in the portrayal of Caesar; he uses Caesar as a foil for Antony, however he is a character in his own right. Shakespeare shows Caesar to be, what you could say, a contradiction. The audience see how Caesar respects Antony's soldier-ship yet still fights him; they see how he clearly loves his sister, but uses her unscrupulously as a political device; and they are shown how he is very rational and dull, yet he surprisingly tells his soldiers, as well as some Egyptians about how he would parade the defeated Cleopatra. ...read more.

What is interesting is Caesar's reaction to the deaths of Antony and Cleopatra. There are suggestions that Caesar believes that they could have been successful partners. He says about them 'that our stars Unreconciliable.' It makes it seem as though Caesar believes it to be almost inevitable, as if it were fate that the ending was so tragic. This cours from coursework.info The way in which Caesar is compassionate when finding out about Cleopatra's death, again highlights the idea that he does show some regret and remorse concerning his relationship with Antony. Caesar announces, concerning Cleopatra that 'she shall be buried by her Antony.' Caesar is noble and compassionate, which is somewhat out of character in saying this; he is completely against their relationship when they are alive, yet in their deaths he shows respect towards the two as a couple. He refers to them as 'A pair so famous.' This shows that Caesar does have some sentimentality. This is unexpected due to the fact that it is clear that Caesar admires strength, so one could think that he would look less upon Antony in particular, as he took his own life through love, which is not particularly recognised as an honourable "Roman" act. ...read more.

He acts almost petty, by assuming that she looks or acts no differently to one of her servants. He is also looking down on Cleopatra; he is probably the only person who was not susceptible to Cleopatra's charm, charisma and immense beauty. However within this subtle insult Caesar refers to Cleopatra as 'Queen of Egypt.' This does show a respect amongst leaders, which again shows his efficiency and loyalty to his status and position.coeg egr seegegw oreg egk ineg foeg eg; It is clever and effective how Shakespeare has portrayed Caesar in 'Antony and Cleopatra' he has a large impact into the tension in the play, due to his contradicting views and attitudes. It is clear how complex the character of Caesar is. The way, in which Corin Redgrave portrayed the character of Octavius Caesar in the 1975 Royal Shakespeare Company performance, has increasingly helped to clarify certain ideas, which arose in the play. His blank, rather monotone appearance, and his limited sign of facial expressions throughout the entire play gave the impression that the character of Caesar is dull, boring and rather more concerned with tactics and war, which does oppose the ideals and attitudes of Antony, and it is these contrasting views and methods of work which enable the audience to understand and recognise the complexity of Caesar's character. ...read more.