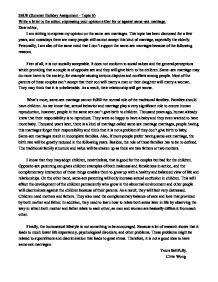 S6UE (Summer Holiday Assignment - Topic 6) Write a letter to the editor, expressing your opinion either for or against same-sex marriage. Dear editor, I am writing to express my opinion on the same-sex marriages. This topic has been discussed for a few years, and nowadays there are many people still cannot accept this kind of marriage, especially the elderly. Personally, I am also of the same mind that I don't support the same-sex marriages because of the following reasons. First of all, it is not socially acceptable. It does not conform to social values and the general perceptions which providing that a couple is of opposite sex and they will give birth to the children. ...read more.

Thousand years ago, human already knew that their responsibility is to reproduce. They were so happy to have a baby and they even wanted to have more baby. Thousand years later, there is a kind of marriage called same sex marriage marriages, people having this marriages forget their responsibility and think that it is not a problem if they don't give birth to baby. Same-sex marriages result in incomplete families. Also, if more people prefer having same-sex marriage, the birth rate will be greatly reduced in the following years. Besides, the role of these families has to be re-defined. The traditional family structure and value will be shaken up as there are two fathers or two mothers. ...read more.

As a result, they will feel very distressed. Children need mothers and fathers. They also need the complementary balance of care and love that provided by both mother and father. In addition, they need to learn how to relate both sexes later in life by observing the way in which both mother and father relate to each other, as men and women are basically different from each other. Finally, the homosexual lifestyle is not something to be encouraged. Because a lot of research shows that it leads to much lower life expectancy, psychological disorders, and other problems. These problems might be related to superstitions and discrimination that leads to great stress. Therefore, it is not a good idea to have same-sex marriages. Yours faithfully, Chris Wong ...read more.