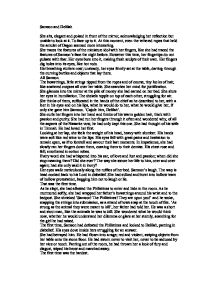 Samson and Delilah She sits, elegant and poised in front of the mirror, acknowledging her reflection but unable to look at it. To face up to it. At this moment, even the tethered ropes that held the amulet of Dagon seemed more interesting. She traces the features of the miniature idol with her fingers, like she had traced the features of Samson's face the night before. However this time, her fingertips do not pulsate with fear. Her eyes bore into it, making fresh sculpts of their own. Her fingers dig holes into its eyes, like hot rods. Her breathing stutters now; unsteady, her eyes firmly set at the table, darting through the curving bottles and objects that lay there. All Samson. The bowstrings, little strings ripped from the ropes and of course, tiny locks of hair, like scattered corpses all over her table. She searches her mind for justification. She glances into the mirror at the pile of money she had earned on her bed. ...read more.

That was the first time. As he slept, she had allowed the Philistines to enter and hide in the room. As he murmured softly, she had wrapped her father's bowstrings around his wrist and to the bedpost. She shrieked 'Samson! The Philistines! They are upon you!' and he woke, snapping the strings into submission, as a strand of tows snap at the touch of fire. 'As strong as the animal they were meant to kill', her father had told her. He was a short and stout man, like the animals he was to kill. She wondered what he would think now, whether he would understand her dilemma or glare at her sternly, searching for the girl he had raised. The first time, Samson had defeated the Philistines and looked to Delilah, panting in disbelief. His eyes dove inside hers struggling for an answer. She had betrayed him. He had flown into a rage; red and violent, swiping objects from her table onto the stone floor. ...read more.

She thinks of Samson and her, laughing as they courted. She put a cup of wine to her lips, not letting her eyes away from his gaze, and sipped the wine. She had offered him some and he drank it. She stroked his lips, wet with grape. 'Tell me what would be needed to bind you'. She held his gaze. His both drowned in intoxication. She was certain that he would tell her that time. The new ropes, strangled Samson's wrists as he slept deeply. The Philistines stirred behind the curtains, their eyes narrow and patient. 'Samson, Samson! The Philistines are upon you!' He woke up, startled and violent with drunkenness. He had twisted his wrists to release their asphyxiation, toppled out of bed and grabbed his sword. He swung it about as the Philistines, perplexed at his strength, ran to save themselves. He held the sword up to Delilah's neck, and she took his wrist and cried her innocence. She begged for mercy and protested that she was not to blame. He swayed gently and panted once again. Asked for a glass of water and sat on the bed with his head buried in his hands. ...read more.