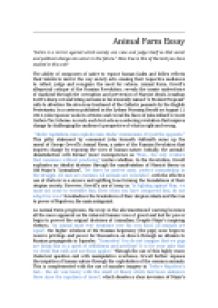 Satire in Animal Farm, A Modest Proposal and A Political Cartoon

﻿________________ Animal Farm Essay ?Satire is a mirror against which society can view and judge itself so that social and political change can occur in the future.? How true is this of the text you have studied in this unit? The ability of composers of satire to expose human faults and follies reflects their talents to mirror the way society acts, causing their respective audiences to reflect, judge and recognize the need for reform. Animal Farm, Orwell?s allegorical critique of the Russian Revolution, reveals the innate malevolence of mankind through the corruption and perversion of Marxist ideals. Jonathan Swift?s sharp wit and biting sarcasm in his ironically named ?A Modest Proposal? calls to attention the atrocious treatment of the Catholic peasants by the English Protestants. In a cartoon published in the Sydney Morning Herald on August 11 2012, John Spooner seeks to criticize and reveal the flaws of Julia Gillard?s recent Carbon Tax Scheme. As such, each text acts as a sobering revelation that inspires change by challenging the audience?s perspective of what is right and wrong. ...read more.

It is for your sake that we drink that milk and eat those apples.? Through the use of this highly ironic rhetorical question cast with manipulative overtones, Orwell further exposes the iniquities of human nature through the exploitation of the common animals. This is complemented with the use of macabre imagery in ?before Napoleon?s feet? the air was heavy with the smell of blood, which had been unknown there since the expulsion of Jones?, which denotes a clear inversion of Major?s ideals to an oppression and domination that is just as bad, if not worse, than the previous leadership. Ultimately, the resulting depravity is echoed in Orwell?s final observation, ?the creatures outside looked from pig to man, and from man to pig? but already it was impossible to say which was which?, in which the circuitous and cyclical nature of mankind is revealed, showcasing Orwell?s ability to incite social and political reform in not only his condemnation of communism, but exposing of the tendency of mankind to return to greed, death and depravity. ...read more.

Through use of rhetorical question cast with farcical overtones in Julia?s speech, ?That?s the whole b****y idea, remember? Putting fossil fuel out of business?, Spooner accentuates the foolishness of Gillard?s scheme to oust a power source that accounts for over 90% of Australia?s energy. The impracticality of Gillard?s policy is conveyed through her impossible request, ?Now go and rig up a windmill or something. I?m freezing,? hence showcasing Spooner?s ability to use absurdity in a cartoon medium to expose the faults of the carbon tax to cause the audience to recognize a need for change. Thus, in George Orwell?s Animal Farm, Jonathan Swift?s A Modest Proposal and John Spooner?s political cartoon, the shortcomings of mankind are reflected in an distorted mirror of society, one that is later polished clean to reveal a much more offensive reality. Ultimately, each author conveys the ability of satire to inspire and evoke change, or as Samuel Johnson expresses, each ?showed that wit, confederated with truth, had such force as authority was unable to resist.? ...read more.