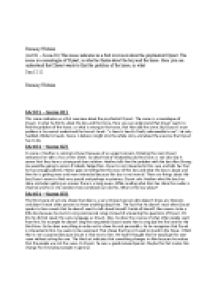 Scene by scene analysis of &quot;Equus&quot;

Also a cowboy is self-concentrated and is alone on the way. Alan doesn?t want to be with his mother anymore. He hates her dictatorship and her speeches about god for instance. He wants to get an own opinion and doesn?t want to have the same one as his mother. He wants to live his own life. Again, he resists to be a person who is made by other people how they want him to be. (Act 01 ? Scene 14) In scene 14 the bad relationship between Frank and Dora becomes apparent. Frank can't talk about his feelings and apprehensions with or in front of Dora. That's why he comes to Dysart to talk to him confidential. Frank is nervous and embarrassed, but he can't keep silent any longer. He knows that his observance is very important and so he brings himself to talk about it. Many times, during referring, he says something bad about religion, like it's b****y and it's the bottom of all the problems. A form of hate comes out of his sentences. He blames Dora for Alan's act, since she always drills a lot of religion stuff into him, behind Frank's back. But that's not the only problem Frank has with the religion of his wife. He aches for love. Corporal love with his wife. But Dora can't give it to him. She wants to live with the rules of God, who doesn't allow senseless s*x. Through this abstinence she takes Frank and herself a wonderful part of life, and gives also a curious relation to Alan. Seeing Alan, lying on the floor, praying to a horse god called ?Equus? and beating himself, Frank is shocked. He doesn't know, how to talk about it with Alan, and so he keeps silent. But his anger grows. His anger for Dora and the religion, that is at the bottom of all this. ...read more.

This affirmation has for Alan a huge meaning. That is why he feels attracted to Jill after this. For a long time Alan thought that having feelings like these ones would be wrong. But seeing his father in the same situation like he was, he understands that these feelings are not wrong but totally fleshly. (Act 02 – Scene 32) In scene 32 Alan's mania escalates. His deportment shows what relation he is having to the horses. He is not able to let himself go being in the propinquity of them. He starts shaking and that shows how he is becoming mad after all. (Act 02 – Scene 33) Alan feels harried by the horses; he wants to have the doors locked as an attempt to lock Equus out. He really wants Jill, but he can’t, because of Equus, who knows and sees everything. He tries to get rid of Equus, but he can’t. He is everywhere. Alan feels ashamed, since he couldn’t go all the way with Jill. It makes him angry. Equus makes him angry, because he made him stop. Alan is scared that Jill would tell anyone about this night. He is embarrassed and doesn't want anyone to know, so he threatens Jill. Jill tries to calm Alan down talking to him, but as she saw Alan’s possessed face she got scared and ran off. This scene is very important for the last part. Iit is the first time Alan was talking about his feeling for and about Equus. (Act 02 – Scene 34) It seems like there is a strong relation between Alan and Nugget. The reason why Alan is persecuted by the horse is the reason for Alan´s crime. I think there was something on his mind telling him to blind the horses. It is a never ending persecution that Alan will keep in his mind. He feels sorry for what he has done but the horses cannot let him go r****g his mind all the time. He is afraid of the horses and of the terrible eyes. He blinded himself hoping never to see the horses again. ...read more.