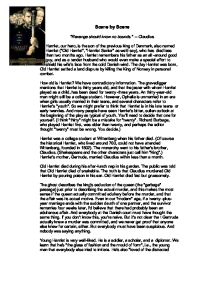 Scene by Scene "Revenge should know no bounds." -- Claudius Hamlet, our hero, is the son of the previous king of Denmark, also named Hamlet ("Old Hamlet", "Hamlet Senior" as we'd say), who has died less than two months ago. Hamlet remembers his father as an all-around good guy, and as a tender husband who would even make a special effort to shield his wife's face from the cold Danish wind. The day Hamlet was born, Old Hamlet settled a land dispute by killing the King of Norway in personal combat. How old is Hamlet? We have contradictory information. The gravedigger mentions that Hamlet is thirty years old, and that the jester with whom Hamlet played as a child, has been dead for twenty-three years. An thirty-year-old man might still be a college student. However, Ophelia is unmarried in an era when girls usually married in their teens, and several characters refer to Hamlet's "youth". So we might prefer to think that Hamlet is in his late teens or early twenties. And many people have seen Hamlet's bitter, sullen outlook at the beginning of the play as typical of youth. You'll need to decide that one for yourself. (I think "thirty" might be a mistake for "twenty". Richard Burbage, who played Hamlet first, was older than twenty, and perhaps the editor thought "twenty" must be wrong. You decide.) Hamlet was a college student at Wittenberg when his father died. (Of course the historical Hamlet, who lived around 700, could not have attended Wittenberg, founded in 1502). The monarchy went to his father's brother, Claudius. (Shakespeare and the other characters just call him "King".) Hamlet's mother, Gertrude, married Claudius within less than a month. Old Hamlet died during his after-lunch nap in his garden. The public was told that Old Hamlet died of snakebite. The truth is that Claudius murdered Old Hamlet by pouring poison in his ear. ...read more.

Polonius tells her (or to the king?), "It's all right, dear, everybody pretends." ("With devotion's visage / and pious action we do sugar o'er / the devil himself.") The king sees the application to himself, and says, "No kidding." ("How smart a lash that speech doth give my conscience!") This is powerful -- we suddenly learn that the king feels horrible about his own crime. Maybe this surprises us. If Polonius is a sinister old man and knows all about the murder, the king says this directly to him as they are out of earshot of Ophelia. Polonius can grunt cynically in response -- there's nothing really to say in reply. If Polonius is a foolish old man, the king says this as an aside. We have just learned that the king really does hate his crime, and suffers under a "heavy burden". Hamlet's famous speech on whether it's worthwhile living or doing anything needs little comment. He says it seems to him that life is not worth living, mostly because people treat each other so stupidly and badly. We also suffer from disease and old age -- even living too long is a "calamity". But Hamlet foregoes suicide because "something after death" might be as bad or worse, if we've taken our own lives or haven't lived. He's saying what many people have felt, especially those who do not assume that the Christian account of the afterlife is true -- or even that there is any afterlife. Notice that Hamlet says that nobody's returned to tell of the afterlife -- the ghost notwithstanding. Shakespeare seems to be saying, loud and clear, "Don't focus on the story. Focus on the ideas." Some people have been puzzled by the lines "Thus conscience does make cowards of us all; / And thus the native hue of resolution / Is sicklied o'er with the pale cast of thought, / And enterprises of great pitch and moment / With this regard their currents turn awry / And lose the name of action." ...read more.

Hamlet puts his foot on the sharp poisoned sword (he knows it's sharp, but not that it's poisoned, and he intended to scratch Laertes back). Hamlet gives his own sword to Laertes, fights again, and inflicts a deeper wound on him, which is why Laertes dies quicker. The queen announces the drink is poisoned, and drops dead. Laertes tells everything, and shouts "The king's to blame!" For the first time, Hamlet can kill the king and have people realize he was right. Hamlet stabs the king with the poisoned blade, then forces the poisoned beverage down his throat. Elizabethans pretended to believe that kings were sacred, so Shakespeare had to have everybody shout "Treason", but nobody does anything. (If the director wishes, the guards and court can draw their own weapons and surround the king. Horatio can show the letters to England at this time, too.) Hamlet says he is dying, and Horatio offers to commit suicide like a Roman soldier when his side was defeated. Hamlet drinks the poison instead, to ensure Horatio won't. If Hamlet saw no reason to live, then Horatio has one -- to tell the truth about Hamlet. In the final scene, Fortinbras happens by, as do the English with word of the spies' execution. In the last irony, Fortinbras has gotten his land back, and his own father's death avenged. Horatio says he'll tell about "accidental judgments", i.e., people have gotten their just deserts through seeming accidents -- the theme of God working in the world to make things right. Fortinbras calls for military honors to be shown Hamlet's body. Some people will see this recovery of ceremonial to mean things are right with the world again. Others will simply see one more example of power passing in an unfair world -- as it was in the real Dark Ages. In Ingmar Bergman's production of "Hamlet", Fortinbras's words, "Bid the soldiers shoot!" is their signal to pull out their guns and slaughter Horatio and the rest of the surviving Danish court. ...read more.