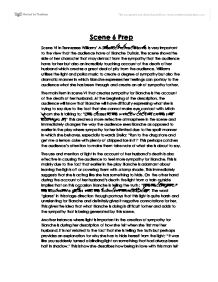 Scene VI in Tennessee Williams A Streetcar named Desire is very important to the view that the audience have of Blanche DuBois.

Scene 6 Prep Scene VI in Tennessee Williams' A Streetcar named Desire is very important to the view that the audience have of Blanche DuBois. The scene shows the side of her character that may detract from the sympathy that the audience have for her but also an incredibly touching account of the death of her husband which creates a great deal of pity from the audience. Williams utilises the light and polka music to create a degree of sympathy but also the dramatic manner in which Blanche expresses her feelings can portray to the audience what she has been through and create an air of sympathy for her. The main item in scene VI that creates sympathy for Blanche is the account of the death of her husband. At the beginning of the description, the audience will know that Blanche will have difficulty expressing what she is trying to say due to the fact that she cannot make eye contact with Mitch whom she is talking to; "[She crosses to the window and sits on the sill, looking out.]" This creates a more reflective atmosphere in the scene and immediately changes the way the audience sees Blanche as opposed to earlier in the ...read more.

Blanche's actual account of the death of her husband is another factor that engages audience sympathy for her. The dramatic manner in which she describes the horrific event causes the audience to get a reconstruction as close to the reality as is necessary to understand Blanche more than earlier in the play; "all ran and gathered about the terrible thing at the edge of the lake!" The fact that she refers to her husband as a 'terrible thing' suggests that he is no longer human to her and portrays to the audience some degree of the horror that Blanche experienced during this instance. In this description the audience also learns that Blanche blames herself for the death of her husband; "It was because - on the dance-floor - unable to stop myself - I'd suddenly said - 'I know! I know! You disgust me...'" The breaks in Blanche's speech obviously show her sobs as she recounting this event and the audience by now must believe that they are genuine. It was not the fact that he cheated on her that made him kill himself but the fact that Blanche resented him for it that pushed him over the edge. ...read more.

Now however the audience is given a reason why she behaves in such a way. It is that she was never just looking for desire but she was in search of attention and love ever since her husband has died. This is perhaps to make her forget about her husband and the fact that now that he is dead he will not age and while she is alive, she will. This is also an explanation for the fact that she is always conscious of her age as she knows that her memories of her husband will be of him as a young man, whilst in the meantime she is always getting older. Scene VI is highly successful in shifting the sympathy of the audience towards Blanche as it gives a perspective of Blanche that is different than the previous scenes. The use of light and music as well as the dramatic way that Blanche retells her husband's death are all devices used to create sympathy. These devices should be successful in the creation of sympathy for Blanche as they highlight areas that may detract from sympathy and explain why she behaves in this manner. ...read more.