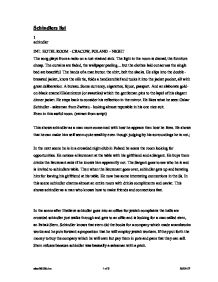 Schindlers list 1 schindler INT. HOTEL ROOM - CRACOW, POLAND - NIGHT The song plays from a radio on a rust-stained sink. The light in the room is dismal, the furniture cheap. The curtains are faded, the wallpaper peeling ... but the clothes laid out across the single bed are beautiful. The hands of a man button the shirt, belt the slacks. He slips into the double-breasted jacket, knots the silk tie, folds a handkerchief and tucks it into the jacket pocket, all with great deliberation. A bureau. Some currency, cigarettes, liquor, passport. And an elaborate gold-on-black enamel Hakenkreuz (or swastika) which the gentleman pins to the lapel of his elegant dinner jacket. ...read more.

He notices a lieutenant at the table with his girlfriend and a Sargent. He buys them drinks the lieutenant asks if he knows him apparently not. The Sargent goes to see who he is and is invited to schindlers table. Then when the lieutenant goes over, schindler gets up and berating him for leaving his girlfriend at his table. He now has some interesting connections in the Ss. In this scene schindler charms almost an entire room with drinks compliments and caviar. This shows schindler as a man who knows how to make friends and connections fast. In the scene after I believe schindler goes into an office for jewish complaints the halls are crowded schindler just walks through and gets to an offic and is looking for a man called stern, an Itzhak Stern. ...read more.

But through out the movie scvhindler changes into someone who knows the people ho work for him and he cares when he buys the second factory he kills no Jews and doesn't make one peace of munitions that works Stern Stern is a Jewish accountant they meet in an office where is is working when he listens to schindler he thinks he is just a sales man with a pitch when he doesn't get why the Jewish people would have more to worry about then money. Stern in there first meeting doesn't trust schindler at all. Steorn used to do the books for a company on lipowa street making pots and pans (enamelware). When schindler asks him if he would know anyone who wants to invest he says n Research Machines plc/Schindlers list 1 of 2 30/04/07 ...read more.