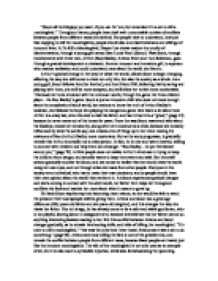 "Shoot all the bluejays you want, if you can hit 'em, but remember it's a sin to kill a mockingbird." Throughout history, people have dealt with uncountable number of conflicts between people from different races (ethnicities). But people have to understand, how just like stopping to kill the mockingbirds, people should also end discriminations and killings of innocent lives. In To Kill a Mockingbird, Harper Lee shows readers the cruelty of discriminations, through a young girl named Jean Louis Finch (Scout). Now Scout, through involvements with three men, Arthur (Boo) Radley, Atticus Finch and Tom Robinson, goes through a gradual development in character, from an innocent and immature girl, to a person who reaches realization and could understand more about the world she lives in. Arthur's gradual change in the way he views the world, allows Scout to begin changing, affecting the way she will come to view not only him, but also the society as a whole. As a young girl, Scout follows Jem (her brother), and their friend Dill, believing that by acting and playing with them, she will be more accepted, and will allow her to feel more comfortable. This leads her to be involved with the unknown world, through the game the three children plays - the Boo Radley's game. ...read more.

Atticus and Scout has a great age difference (fifty years old father and six years old daughter), and this changes the way she views her father. Due to his age, he has already come to be a calm and stable gentleman, who is not playful, leaving Scout in disappointment, because she believes that her father cannot do anything interesting besides reading to her. But this conflict between Atticus and Scout changes gradually, as he reveals his shooting skills, and talks of killing the mockingbird. "It's a sin to kill a mockingbird," "that was the only time I ever heard Atticus say it was a sin to do something," (page 98). Atticus sees how killing the bird is one of the greatest sins, and reveals the conflict between people from different races, because black people are treated just like the innocent mockingbirds. The talk of the mockingbird is not only used as an example of sin, but it is also used to symbolize injustice, while also foreshadowing the upcoming event of Tom Robinson's court. Scout has a hard time everywhere she goes, because not only does the townspeople insult Atticus for defending Tom (even small children such as Cecil Jacob), but her relatives, especially Aunt Alexandra, also criticizes him for disgracing his whole family. ...read more.

Even a small child like Scout, knows to think about why people are treated as they are, especially the reason why black people are discriminated against, and whether it is fair to do so. This shows how Scout has come to realize more about the reality of people's different treatments of those from another race. As she goes through conflicts with people around her, she comes to have a greater view of the world, and at the same time learn to overcome difficulties by herself, contributing to her own growth in character and to maturity. Scout's idea on Arthur Radley, Atticus Finch, and on Tom Robinson changes through the story, as she develops due to their influences. Despite what the townspeople tells her, she still chooses to trust in what her father taught her and believes in what she thinks to be the right thing to do (no discrimination). Harper Lee, through this young girl, shows the cruelty of the world, but at the same time, the author also gives readers hope in that there are still justices in the world. Therefore, although there are still those that suffer from discriminations in the world even today, people should continue to find their own righteousness, and try to find a way for everyone to live peacefully. ...read more.