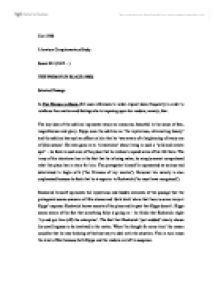 Unit 2709 Literature Complementary Study Susan Hill (1942 - ) THE WOMAN IN BLACK (1983) Selected Passage In The Woman in Black, Hill uses references to wider-impact ideas frequently in order to reinforce the emotion and feelings she is imposing upon her readers; namely, fear. The key idea of the sublime represents nature as awesome; beautiful in the sense of fear, magnificence and glory. Kipps sees the sublime as 'the mysterious, shimmering beauty' and the sublime has such an effect on him that he 'was aware of a heightening of every one of (his) senses'. He even goes on to 'romanticize' about living in such a 'wild and remote spot' - he feels in such awe of the place that he wishes to spend some of his life there. The irony of his intentions lies in the fact that he is being na�ve; he simply cannot comprehend what this place has in store for him. ...read more.

Gothic features are represented in nature frequently ('immensity and wideness of marsh and sky') and the fact that there were 'smaller and smaller figures'. There is a sense that humans are tiny against nature's forces. Hill introduces the pathetic fallacy and the sense of the sublime once more in the description of 'a great, wintry, golden-red ball' as well as 'fire and blood-red streaks'; these are metaphors which emphasise the forces of nature and give the impression that it is much more powerful than humanity. The 'ruins' Kipps encounters at first are of an 'ancient chapel'; he guesses them to be 'monastic in origin'. This particular fact is associated with the idea of religion, prayer and devotion. The ruins ('all broken down and crumbling') which are 'lying about in the grass' imply that human achievements are insignificant in the great time scale of nature. ...read more.

This ironic fantasy as well as Kipps' bird-watching of beautiful birds earlier on provides a direct contrast between the bird Kipps encounters and his imaginary and birds. Furthermore, as soon as Kipps' fantasy ends, he enters a 'small burial ground'. Here, he comes across the 'unpleasant, snake-necked bird' a second time; this time however 'its beak was hookes around a fish that writhed and struggled helplessly'. The actions of the bird at this moment reinforces the ideas of evil and cruelty - that the world is a harsh place and in many cases out of control of humans. Generally, the reader feels true respect towards Kipps' bravery slightly further on in the story, when his calmness and equanimity are restored; he has renewed courage. He feels far 'more composed' and intends not to run away; instead, he keeps his 'determination' and decides to 'face it out'. The protagonist is exhibiting hubris; he has an arrogant belief that he is immune and that he can take on and overcome the forces of evil, but he can only meet his nemesis. ...read more.