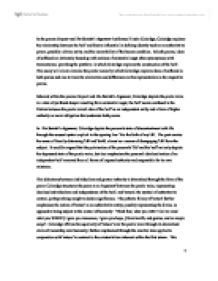 In the poems Despair and The Suicide's Argument by Samuel Taylor Coleridge, Coleridge explores the relationship between the 'self' and factors influential in defining identity such as an authoritative power, possibly a divine entity, and the inexorability of the human condition. In both poems, ideas of selfhood are intimately bound up with notions of existential angst often synonymous with Romanticism, providing the platform in which Coleridge explores the construction of the 'self'. This essay will aim to examine the poetic means by which Coleridge explores ideas of selfhood in both poems and also to trace the similarities and differences in this representation in the respective poems. Inherent within the poems Despair and The Suicide's Argument, Coleridge depicts the poetic voice in a state of profound despair resulting from existential angst; the 'self' seems confused in the friction between the poetic voice's idea of the 'self' as an independent entity and a form of higher authority or moral obligation that undercuts both poems. In The Suicide's Argument, Coleridge depicts the persona's state of discontentment with life through the unusual syntax explicit in the opening line: 'Ere the birth of my life'. ...read more.

This emotive tone is created through the employment of primarily anapaestic feet, increasing the pace of the stanza and creating a climactic effect. Essentially, the persona is completely subservient to the greater authority implied in 'nature' and is therefore obliged to continue living: 'Return you me guilt, lethargy, despair? | Make out the invent'ry; inspect, compare! | Then die - - if die you dare!' It seems that Coleridge is implying that humanity has no real control over the 'self' and is bound by ties to authoritative control inherent within the natural condition of man, or indeed a greater power. Similarly, Coleridge explores the notion of imposed indissoluble authority on self-identity in Despair. For example, the poet emphasises the immutable superiority that binds humanity to 'the Tyranny of Life' at the expense of the individualisation of the 'self': 'I have experienc'd | The worst, the World can wreak on me'. The 'World' imposes authority on humanity and, according to the poetic voice, can only be overcome through the annihilation of the 'self' in a literal sense: 'Well may I break this Pact, this League of Blood | That ties me to myself'. ...read more.

by their capitalisation; the poetic voice is bound to human experience and the inexorability of such imposes constraints on the 'self', essentially resulting in the persona's depressed state of mind. Unlike The Suicide's Argument, this poem is in blank verse and has no definitive meter, mirroring the melancholy of the poetic voice and synchronising with the despairing tone in order to emphasise the existential angst surrounding selfhood at the heart of the poem. In conclusion, Coleridge explores the influence that imposed authority in varying forms has on the construction of the 'self' in his Romantic poems Despair and The Suicide's Argument. Through the depiction of religious and moral authority, the poet presents the detrimental effects such factors have on the poetic voices of both poems in relation to their explicit existentialism, and in doing so encapsulates the dichotomy between the idealised individual 'self' and the authority of an immutable power, such as 'nature' or a greater being. As an extension to this, Coleridge depicts the inexorability of the human condition as a fundamental force in defining the 'self' particularly in Despair, but also encapsulates the wider influence environment factors outwith human control has on self-identity. Word count: 994 2 3 ...read more.