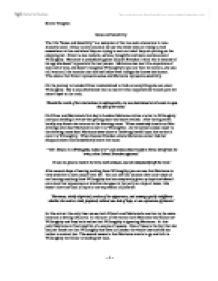 Sense and Sensibility The title "Sense and Sensibility" is a metaphor of the two main characters in Jane Austen's novel. Elinor is very practical we see this when they are trying to find somewhere to live and when they are trying to sort out what they are putting on the shopping list. Elinor is also realistic, serious, thoughtful and more cautious about Willoughby. Marianne is prejudiced against Colonel Brandon I think this is because of his age she doesn't appreciate the real person. Marianne also has little experience of men and of love, she doesn't recognise Willoughby's type our how he really is, she also still wants all the luxuries that she had before even though she knows she cannot. This shows that Elinor represents sense and Marianne represents sensibility. ...read more.

Elinor, it is Willoughby, indeed it is!" and seemed almost ready to throw herself into his arms, when Colonel Brandon appeared.' 'It was too great a shock to be borne with calmness, and she immediately left the room.' After several days of hearing nothing from Willoughby you can see that Marianne is very sensitive to how people treat her. You can see this because after only 4 days of not hearing anything from Willoughby she has completely given up hope and doesn't care about her appearance or whether she goes to the party or stays at home. She doesn't have one look of hope or one expression of pleasure. 'Marianne, wholly dispirited, careless of her appearance, and seeming equally indifferent whether she went or staid, prepared, without one look of hope, or one expression of pleasure.' ...read more.

Elinor treats Marianne as though they are pupil and teacher (Elinor is the teacher). When it really matters their sisterly bond seems to sever any bad feelings the sisters have for one another and they seem to share each others feelings. In this extract we see this mainly after Marianne gets Willoughby's letter of rejection. 'On opening the door, she saw Marianne stretched on the bed, almost choked by grief, one letter in her hand, and two or three others lying by her. Elinor drew near, but without saying a word; and seating herself on the bed, took her hand, kissed her affectionately several times, and then gave way to a burst of tears, which at first was scarcely less violent than Marianne's. The latter, though unable to speak, seemed to feel all the tenderness of this behaviour, and after some time thus spent in joint affliction,' Kirstie Vaughan - 1 - ...read more.