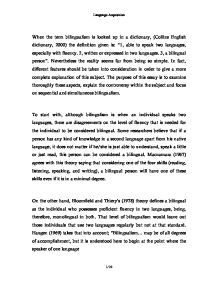 When the term bilingualism is looked up in a dictionary, (Collins English dictionary, 2000) the definition given is: "1, able to speak two languages, especially with fluency. 2, written or expressed in two languages. 3, a bilingual person". Nevertheless the reality seems far from being so simple. In fact, different features should be taken into consideration in order to give a more complete explanation of this subject. The purpose of this essay is to examine thoroughly these aspects, explain the controversy within the subject and focus on sequential and simultaneous bilingualism. To start with, although bilingulism is when an individual speaks two languages, there are disagreements on the level of fluency that is needed for the individual to be considered bilingual. Some researchers believe that if a person has any kind of knowledge in a second language apart from his native language, it does not matter if he/she is just able to understand, speak a little or just read, this person can be considered a bilingual. Macnamara (1967) agrees with this theory saying that considering one of the four skills (reading, listening, speaking, and writing), a bilingual person will have one of these skills even if it is in a minimal degree. On the other hand, Bloomfield and Thiery's (1978) ...read more.

proposes that children first just have a set of rules for both languages and slowly they start identifying which rule is for which language. Volterra and Taeschner (1978) believe in a slightly different theory where the bilingual child goes through three different stages; starting with one lexical system that both languages share, then the child reaches the stage where two lexicons are differentiated sharing just one grammar system and by the third stage the differentiated grammars have been acquired. To sum up, the controversy in defining the bilingualism phenomenon is found in the qualities that need to be examined in order to give an evaluation of an individual's bilingualism. As seen in this essay, different researchers focus on the level of fluency in the languages making a differentiation between balanced and unbalanced bilinguality. Other researchers consider that to define the phenomenon other factors should be taken into consideration such us the regular uses of the languages, or in which domains they are used. The distinction made between coordinate, compound and subordinate bilingualism has been examined as well as the simultaneous and sequential difference in acquisition of the languages in bilingual children. After exploring the subject it has become evident that the complexity of the different theories cannot be summed up in a short definition that just includes the idea of that a bilingual individual is one who speaks two languages. ...read more.