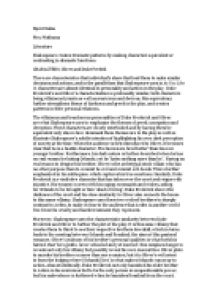 ﻿Njeri Muhia Mrs. Muthama Literature Shakespeare creates Dramatic patterns by making characters equivalent or contrasting in dramatic functions. CHARACTERS: Oliver and Duke Fredrik There are characteristics that individual?s share that lead them to make similar decisions and actions, and in the parallelism that Shakespeare uses in As You Like It, characters are almost identical in personality and action in the play. Duke Frederick?s and Oliver?s characterization is profoundly similar, both characters being villainous tyrants as well as avaricious and devious, this equivalency further strengthens theme of darkness and greed in the play, and creates patterns in their personal relations. The villainous and treacherous personalities of Duke Frederick and Oliver are what Shakespeare uses to emphasize the themes of greed, usurpation and deception. These characters are closely interlinked and by having them be equivalent only shows how dominant these themes are to the play as well as illustrate Shakespeare?s subtle intention of highlighting his own dark perception of society at the time. ...read more.

Shakespeare uses these two wicked brothers to sharply contrast to Arden, to make it clear to the audience that Arden is another world free from the cruelty and harsh treatment they represent. Moreover, Shakespeare uses the characteristic similarity between Duke Frederick and Oliver to further the plot of the play. It is this same villainy that creates them to thirst to see their respective brothers downfall, which in turns leads to the meeting between Orlando and Rosalind, the stars of this pastoral romance. Oliver?s jealousy of his brother?s personal qualities is what fuels his hatred, that ?he?s gentle, never schooled and yet learned?, this misplaced anger is reveals not only his villainy but possibly reveal his own insecurities. Oliver plots to murder his brother on more than one occasion, but it is Oliver?s evil intent to burn the lodging where [Orlando] lies? is what makes Orlando run away to Arden. ...read more.

As much as these two characters almost make the same man, there is one difference and that is the power and influence that they possess. As much as Oliver is the king of his household and left to take care of his siblings, he does not posses much strength, he is even ?sieze[d by] his brother?, and there is an evident power struggle between these two characters. Whereas Duke Frederick has completely usurped his brothers court and there is no power struggle identified. Moreover, his interaction with Oliver, Duke Frederick clearly is more dominating ordering Oliver to find Orlando. In entirety, the villainous ways of these two men, although they may play smaller roles, they contribute greatly to the development of this play, the tragedy, the darkness, and the romance. Therefore, this is why Shakespeare almost replicates the same character for these two men to play the big bad wolves. ...read more.