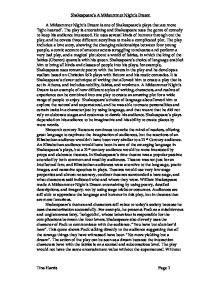 Shakespeare's A Midsummer Night's Dream A Midsummer Night's Dream is one of Shakespeare's plays that are more 'light-hearted'. The play is entertaining and Shakespeare uses the genre of comedy to keep his audience interested. He uses several kinds of humour through out the play, and he covers three different storylines to make a complicated plot. The play includes: a love story, showing the changing relationships between four young people, a comic account of amateur actors struggling to rehearse and perform a very bad play, and a magical plot about a world of fairies, in which the king of the fairies (Oberon) quarrels with his queen. Shakespeare's choice of language enabled him to bring all kinds and classes of people into his plays, for example, Shakespeare uses romantic poetry with the lovers in the play and he develops a realism based on Christian folk plays with Bottom and his rustic comrades. It is Shakespeare's clever technique of writing that allowed him to create a play that is set in Athens, and includes nobility, fairies, and workmen. A Midsummer Night's Dream is an example of how different styles of writing, characters, and realms of experience can be combined into one play to create an amazing plot for a wide range of people to enjoy. Shakespeare's choice of language also allowed him to explore the natural and supernatural, and he was able to create personalities and certain traits in ...read more.

Theseus' forthcoming marriage to Hippolyta, a lady warrior whom Theseus has defeated in battle, may have been Shakespeare's ideal form of marriage, but it is yet again sending out a subtle message that supports the fact that women are weaker than men. The fact that Theseus had to conquer the queen of the Amazon to receive her hand in marriage suggests that Hippolyta had no choice but to marry the man who had beaten her in battle. Their relationship is not one of passion and love, but their wedding is the reason for the presence of the fairies and workmen in the forest near Athens, and it is Theseus's command that drives the lovers there. The opening scene of the play starts off seriously with a tragedy but it ends with a comical play. In Act 5 Scene 1 the problems between the four lovers have been resolved and after waking from their strange 'dream' Oberon had created for them Bottom, Helena, Demetrius, Hermia and Lysander are all bewildered at their recent experience. They can't quite figure out whether it was all an illusion or reality. Theseus decides to watch the play within a play, Pyramus and Thisbe, because he appreciates the effort the workmen have put into the play. The workmen are all very simple characters, named according to their personality, and once they have performed their play, although it is bad, the audience finds the performances of Bottom and his colleagues comical and amusing. ...read more.

Hippolyta is the only character in the play that has a free range of speech, the lovers speak in rhyming couplets, the workmen express themselves in prose, and the fairies in short lined poetry. Oberon speaks in elegant blank verse to Titania but also in rhyming couplets similar to those of the lovers. Shakespeare uses a more complex form of poetry for the speeches of Oberon and Titania to make the fairy kingdom seem luxurious, so that his words would've been enough to catch the imagination of his audience. Shakespeare will be successful in entertaining audiences for years to come because his plays don't just consist of ordinary language; his plays are works of art. His precise and accurate poetry is so detailed that certain characters have certain amounts of syllables in their speeches (blank verse), e.g. the majority of lines in Oberon's speeches have exactly 10 syllables. Shakespeare's plays will still be successful for decades to come because his plays are imaginative and he can use symbolism to create hidden meanings in objects, e.g. the magical flower described by Oberon could be a symbol for irrational love or a metaphor for foolish and short-lived passion. In my opinion, Shakespeare was successful in keeping me entertained because A Midsummer Night's Dream has three very good elements of entertainment; love, magic and comedy represented with different stories and characters. ?? ?? ?? ?? Tina Harris Page 1 ...read more.