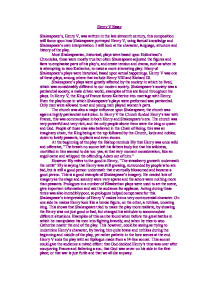 Shakespeare's, Henry V, was written in the late sixteenth century.

Henry V Essay Shakespeare's, Henry V, was written in the late sixteenth century, this composition will focus upon how Shakespeare portrayed Henry V, using factual knowledge and Shakespeare's own interpretation. I will look at the character, language, structure and history of the play. Most Shakespearian, historical, plays were based upon Holinshead's Chronicles, these were mostly true but often Shakespeare adjusted the figures and facts to emphasise parts of his play's, and create tension and drama, such as when he is attempting to woo Katherine, to make a more interesting play. Many of Shakespeare's plays were historical, based upon actual happenings. Henry V was one of these plays, among others that include Henry VIII and Richard III. Shakespeare's plays were greatly affected by the society in which he lived, which was considerably different to our modern society. Shakespeare's society was a patriarchal society, a male driven world, examples of this are found throughout his plays. In Henry V, the King of France forces Katherine into marriage with Henry. Even the playhouse in which Shakespeare's plays were preformed was patriarchal. Only men were allowed to act and young men played women's parts. The church was also a major influence upon Shakespeare; the church was again a highly patriarchal institution. In Henry V the Church funded Henry's war with France, this was commonplace in both Henry and Shakespeare's era. ...read more.

Many people see Henry as a hero; there are prime examples of this throughout the play, he fights for a just cause, the Salic law (this is a law in which the throne cannot be inherited through the mother's side of the family. This law was used in Germany and not in France, which France claimed they did; however the present king of France had inherited the throne through his mother, making the present king invalid.) and the way in which he inspires his comrades at the battle of Harfleur, "Once more into the breach, dear friends, once more; or close up the wall with our English dead." Henry gives his soldiers a sense of belonging by calling them "brother" and "friend". This could be seen as heroism, giving his soldiers something they would usually never have. However it could be seen as trying to manipulate his men into fight well for him, at the battle of Agincourt, Henry reads out the names of the English nobility but when he comes to read the names of the dead commoners he simply states, "None else of name; and of all other men but five and twenty." This suggests that in reality, Henry would not have even looked at these people twice, let alone call them, "brother" and "friend". "Henry V" uses many dramatic devices to keep the play interesting for its audience. ...read more.

I do not believe that Shakespeare intended for Henry V to be played with a strong alignment, neither good nor evil. Henry is a complex character and is both good and bad. This fragmented character is very effective in this play, and makes Henry V, in particular a good character. The overall effect of the play upon the audience could have a mixed effect. The speeches before the battles would have kept the audiences attention. The threats before Harfleur would keep them in suspense. There are scenes however that I have mentioned before, mainly the comedy and love scenes, that are not required of the play, yet they are added to keep the audience more entertained. Most of this play includes violence, be it the battles of Agincourt and Harfleur, or killing one of his former friends, after he stole a "pax", to prove a point that he was not the young and impressionable man he was when he came to the throne of England. Violence is a main theme in the play, with love and comedy as sub-plots to keep the audience interested. This would have appealed to huge numbers of people, be it peasants and serfs up to barons and nobility, Shakespeare saw the fact that single themed stories only appealed to certain members of that time, instead he put in a large variety of things to attract different people, similar in many ways to what movie and play writers do today. ...read more.