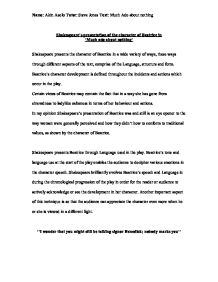 Shakespeare's presentation of Beatrice in Much ado about nothing

Shakespeare's presentation of the character of Beatrice in 'Much ado about nothing' Shakespeare presents the character of Beatrice in a wide variety of ways, these ways through different aspects of the text, comprise of the Language, structure and form. Beatrice's character development is defined throughout the incidents and actions which occur in the play. Certain views of Beatrice may contain the fact that in a way she has gone from shrewdness to ladylike calmness in terms of her behaviour and actions. In my opinion Shakespeare's presentation of Beatrice was and still is an eye opener to the way women were generally perceived and how they didn't how to conform to traditional values, as shown by the character of Beatrice. Shakespeare presents Beatrice through Language used in the play. Beatrice's tone and language use at the start of the play enables the audience to decipher various emotions in the character speech. Shakespeare brilliantly evolves Beatrice's speech and Language in during the chronological progression of the play in order for the reader or audience to actively acknowledge or see the development in her character. Another important aspect of this technique is so that the audience can appreciate the character even more when he or she is viewed in a different light. ...read more.

It underlines the change in her emotional polarity; other ways in which Shakespeare changes speech from in his plays include the variation from Iambicpentametre (Intelligent speech) to prose. Beatrice's change in speech format is easy for the audience to pick up on because it is imbibed with an occurrence in the play which forces such change. In this case it is the getting together of Beatrice and Benedick. Imagery is a major asset of Shakespeare's in character presentation. Bestial imagery is the primary technique used by Shakespeare to present Beatrice in certain lights for general benefit of the audience. It allows the audience to visually acknowledge Beatrice on a whole different level. Most importantly, it allows the audience to see Beatrice through the point of view of the character which is interacting with her either at that point in time or over long periods of time. (i) ''I would my horse had the speed of your tongue'' (ii) ''So some gentleman or other shall 'scape a predestinate scratched face'' Benedick's use of the words scratched and hose is associated with animal imagery, the reference to Beatrice's speed of tongue is a direct reference to her wit and ability to verbally spar with Benedick. ...read more.

It intertwines with Shakespeare's structural evolution of Beatrice's character in terms of the fact that it passes as further evolution in her character from strongly independent to in love and finally spiteful. This technique used by Shakespeare can be regarded as his way of generally catering for a wide audience in terms of the behaviours these characters need to display in order toe certain audience members to relate to them. To conclude Shakespeare's presentation of Beatrice as a character in 'Much ado about nothing', it can generally be derived from the play through the structure, form and language used by Shakespeare, that Beatrice is strong and independent character. Who as a result of various events and occurrences is seen in a wide variety of ways, Shakespeare does this through the writing techniques he uses. The techniques highlight the depth of these her character which the audience might not fully appreciated. Shakespeare creates a system which allows Beatrice to be appreciated by all audience members, irrespective of the angle from which the character is viewed. Word Count: 1,546 ?? ?? ?? ?? Name: Akin Asolo Tutor: Steve Jones Text: Much Ado about nothing ...read more.