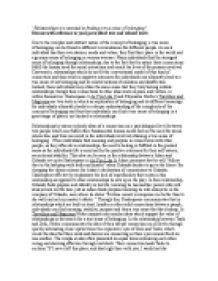 Shakespeares As You Like It and Khyenstse Norbus Travellers and Magicains are two texts in which an exploration of belonging and its different meanings for individuals ultimately leads to a deeper understanding.

﻿?Relationships are essential to finding a true sense of belonging? Discuss with reference to your prescribed text and related text/s Due to the complex and abstract nature of the concept of belonging, a true sense of belonging can be found in different circumstances for different people. As each individual has their own desires, needs and values, they find their place in the world and a genuine sense of belonging in various avenues. Many individuals find the strongest sense of belonging through relationships, due to the fact that by nature these connections fulfill the human need for social interaction and enrich the lives of the persons involved. Conversely, relationships which do not fit the conventional model of this kind of connection and thus result in negative outcomes for individuals can ultimately lead to a true sense of not belonging and its related notions of isolation and disaffection. Instead, these individuals may attain the same sense that they truly belong outside relationships, though their connections to other ideas such as place and culture, or within themselves. Shakespeare?s As You Like It and Khyenstse Norbu?s Travellers and Magicains are two texts in which an exploration of belonging and its different meanings for individuals ultimately leads to a deeper understanding of the complexity ...read more.

Whilst there may be an almost inextricable link between belonging and relationships, not all relationships ultimately lead to individuals finding a genuine sense of belonging which manifests itself in positive outcomes for their lives. Some relationships can be driven by the quest to maintain control, have power and maintain authority over others or by the decisively one sided benefits to one of the individuals involved. In these relationships, it is more likely that individuals find themselves not belonging, isolated and disaffected rather than finding a true sense of belonging. This idea is expanded on by Norbu in Travellers and Magicians. The relationship between Deki and Agay is characterized by Agay?s domination of his young and beautiful wife. This is emphasized through low shots which place the vertically challenged Agay in a position of power over Deki and his statement to Tashi that he makes her live in the isolated hut with him because ?We may grow old, but our jealousy stays young.? Deki is thus presented by Norbu as isolated in her relationship; she does not feel the strong connection with Agay that conventional notions of being in the marriage relationship would suggest. ...read more.