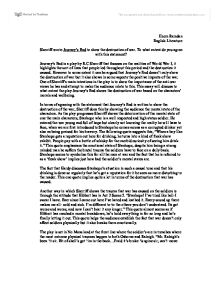 Sherriff wrote Journey(TM)s End to show the destruction of war. To what extent do you agree with this statement?

"Stanhope! I've tried like h**l-I swear I have. Ever since I came out here I've hated and loathed it. Every sound up there makes me all- cold and sick. I'm different to-to the others-you don't understand. Its got worse and worse, and now I can't bear it any longer." This quote almost seems as if Hibbert has reached a mental breakdown, he's held everything in for so long and he's finally letting it out. This quote helps the audience establish the fact that war doesn't only affect soldiers physically but it also breaks them emotionally. The play is set in No Mans land at the front line where the soldier's are in trenches where the most extreme physical traumas happen to both Osborne and Raleigh. "Mr. Raleigh's been 'it sir. Bit of shell's got 'im in the back...Fraid it's broke 'is spine sir; can't move 'is legs." This injury to such a young innocent soldier who has just entered the war creates a sense of sympathy towards the characters from the audience and once again reinforces the terrible traumas of war. ...read more.

When comparing this play with other war texts, it appears to be that 'A Soldier's Declaration' from the novel regeneration share the same sort of context - fighting for justice in the war and outlining the fact that people's lives are torn apart by warfare. "I have seen and endured the suffering of the troops, and I can no longer be a party to prolong these sufferings for ends which I believe to be evil and unjust." Similarly, Sassoon feels strongly about the suffering of soldiers yet portrays his argument more explicitly compared to Sherriff who does it through the relationships of the characters. In conclusion, the way in which Sherriff describes the mental and physical traumas that the soldiers endured during World War I and the views that he shares on war are all of a negative aspect. He touches really slightly on the comradeship between the soldiers which adds somewhat a sense of an optimistic tone throughout the play. However, as a whole the purpose of Journey's End was to show the reality of the war which is the unfortunate destruction that it caused. ...read more.