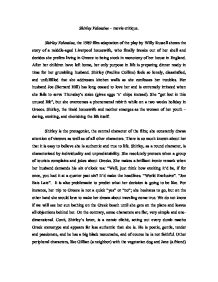 Shirley Valentine - movie critique. Shirley Valentine, the 1989 film adaptation of the play by w***y Russell shows the story of a middle-aged Liverpool housewife, who finally breaks out of her shell and decides she prefers living in Greece to being stock in monotony of her house in England. After her children have left home, her only purpose in life is preparing dinner ready in time for her grumbling husband. Shirley (Pauline Collins) feels so lonely, dissatisfied, and unfulfilled that she addresses kitchen walls as she confesses her troubles. Her husband Joe (Bernard Hill) has long ceased to love her and is extremely irritated when she fails to serve Thursday's stake (gives eggs 'n' chips instead). She "got lost in this unused life", but she overcomes a phenomenal rebirth while on a two weeks holiday in Greece. Shirley, the timid housewife and mother emerges as the woman of her youth - daring, exciting, and cherishing the life itself. ...read more.

convinced that "all men are potential rapists, even the pope", help to put Shirley's story together and make it smooth and alive. Action of the movie is arranged around Shirley. Components of action, sequence of incidents are controlled and connected by conflict, which refers to circumstances the main character tries to overcome - antagonist. Here, the role of antagonist plays loneliness, dissatisfaction, and feeling of lost life. Although all negative, they trigger series of positive events that lead the protagonist to the happy end, sort of personal liberation, a rebirth. The first minutes of the film introduce the background, characters, and conflict. Here we find Shirley talking to the walls of her kitchen, her boring husband, and some few friends. Complications occur, when she tries to learn answers to the questions: "Why my life is so grey and flat and what can I do to make it better?" She embarks on a trip to Greece and here is the beginning of a remarkable change in her life. ...read more.

Situational irony is also a useful tool and is present in the movie. Let's have a look at Shirley sitting at the dinning table with Joe (husband) and staring at him in disbelief after he shouted out his discontent and thrown eggs 'n' chips on her. She was a good wife struggling to fulfill Joe's demands every single day; however, he decided to punish her, for she was not good enough to him. Shirley Valentine has a message for everyone, not just women. She longs to finally have her "unfulfilled dreams" come true. She proclaims: "The girl who used to be me, she could fly (...) and I think she's been gone too long". That "tool long" is her awaking. She realizes that yes! she can fly again and it is only up to her whether she will. She overcomes her fear of the land beyond the kitchen, takes a deep breath, and enjoys the miracle of life. So many people get lost in their lives and the same group of people can wake up and enjoy the life again, just like Shirley. ...read more.