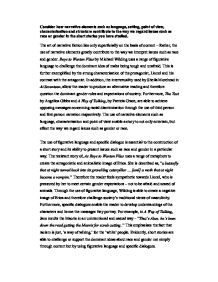 Consider how narrative elements such as language, setting, point of view, characterisation and structure contribute to the way we regard issues such as race or gender in the short stories you have studied. The art of narrative fiction lies only superficially on the basis of content - Rather, the use of narrative elements greatly contribute to the way we interpret issues such as race and gender. Boys to Wanton Flies by Michael Wilding uses a range of figurative language to challenge the dominant idea of males being tough and unafraid. This is further exemplified by the strong characterisation of the protagonist, Lionel and his contrast with the antagonist. In addition, the intertexuality used by Sheila Morehead in At Seventeen, allow the reader to produce an alternative reading and therefore question the dominant gender roles and expectations of society. Furthermore, The Test by Angelica Gibbs and A Way of Talking, by Patricia Grace, are able to achieve opposing messages concerning racial discrimination through the use of third person and first person narration respectively. ...read more.

The third person narration used in The Test helps the reader identify with the protagonist, Marian and therefore we see the story progress from her perspective. This allows the development of a more personal and engaging relationship between the reader and Marian. Therefore, when the inspector laughs at her for, "[getting her] college degree," and being, "born in Scranton, Pennsylvania," we view his r****t actions as antagonistic, insulting and rude. However, it is the way in which the point of view is presented that determines how successful a narrative is in conveying its themes and issues. For example, the first person point of view in A Way of Talking is from the older sister who observes Rose's wild reaction rather than being directly involved. Although we normally associate first person narration with a closer relationship between the reader and the character, in A Way of Talking the narrator provides an overview of the events and therefore the reader does not become as emotionally engaged with the characters. ...read more.

The intertexuality used here enables the story to challenge the dominant ideas of men being the strong heroes and women being weak and dependant. Evidently, the art of narrative fiction lies only superficially on the basis of content - Rather, the use of narrative elements greatly contribute to the way we interpret issues such as race and gender. The Test and A Way of Talking heavily rely on the point of view to help the reader identify with or reject certain characters and are therefore able to convey their contrasting messages regarding r****m. Furthermore, the combination of strong characterisation and figurative language enable As Boys to Wanton flies to challenge the gender expectation of males being tough and unafraid. Dominant ideas of gender roles such as, males being, 'the heroes,' and females being weak are also challenged through the use of intertexuality in At Seventeen by Sheila Morehead. Although the content of short stories may seem engaging and entertaining, the way we regard issues such as race and gender are significantly affected by the combination of narrative techniques. ...read more.