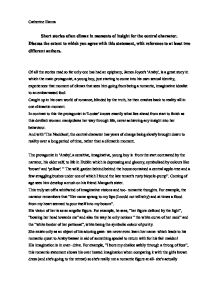 Short stories often climax in moments of insight for the central character. Discuss the extent to which you agree with this statement, with reference to at least two different authors.James Joyce's 'Araby',Louise', by Somerset Maugham and 'The Necklace',

Short stories often climax in moments of insight for the central character. Discuss the extent to which you agree with this statement, with reference to at least two different authors. Of all the stories read so far only one has had an epiphany, James Joyce's 'Araby', is a great story in which the main protagonist, a young boy, just starting to come into his own s****l identity, experiences that moment of climax that sees him going from being a romantic, imaginative idealist to an embarrassed fool. Caught up in his own world of romance, blinded by the truth, he then crashes back to reality all in one climactic moment. In contrast to this the protagonist in 'Louise' knows exactly what lies ahead from start to finish as this devilish women manipulates her way through life, never achieving any insight into her behaviour. And with 'The Necklace', the central character has years of change being slowly brought down to reality over a long period of time, rather than a climactic moment. The protagonist in 'Araby', a sensitive, imaginative, young boy is from the start contrasted by the narrator, his older self, to life in Dublin which is depressing and gloomy, symbolised by colours like 'brown' and 'yellow'. " The wild garden behind behind the house contained a central apple-tree and a few straggling bushes under one of which I found the late tenant's rusty bicycle-pump". ...read more.

that " she could dance till five in the morning at a party, but if it was dull she felt very poorly and poor Tom had to take her home early". There is a pattern: if 'Louise' doesn't like the way things are going she suddenly becomes ill or has a heart attack! This lady doesn't need an epiphany as she holds all the answers and pulls all the strings to achieve what she wants. When her first husband catches his death out sailing one day,it is because his lovely sick Louise has all the blankets leaving him to freeze! This is a typical Louise thinking of herself, and conveniently he leaves her a small fortune as well as a daughter. After Tom's death her friends double their attention\not really through choice but because "They had to, because if she was called upon to do any-thing tiresome or inconvenient her heart went back on her and there she was at death's door". Her second husband,(yes her second after just one year!), George Hobhouse, an ambitious soldier with wealth gives up his career to look after Louise, maybe because she assured him, "I shan't live to trouble you long". Which is ironic as she outlives him as well. After her second husband's death she turns her villa in Monte Carlo into a hospital for Convalescent officers. ...read more.

Her vanity takes over on this occasion when she barrows that "superb riviere of diamonds" without a thought. Another chance moment is at the end of the party when she is leaving. She doesn't want anybody seeing her with a shabby cloak on so she runs for the streets instead of waiting for the carriage to arrive. This decision truly has an impact on the story and she realizes that, "The diamonds are gone! , I _I have lost Madame Forestier's necklace!". Life is a roller-coaster ride from that very moment, having borrowed the money to replace the necklace putting them in debt for many years working around the clock to pay it off. This brings the best out in the protagonist and really makes her see life in a different light! At the end of the story when she meets Madame Forestier and tells her what happened tens years ago, when she lost her necklace and she said, " you know, it was not easy for us, who had nothing- but it is finished, and I am very happy." This is however an insight that took ten years to achieve. Madame Forestier's revitalisation at the end, "oh my poor dear Mathilde! But mine were paste. They were not worth more than 500 francs at most." ( This might symbolize the fakeness of her former dreams), but the story ends there- even this shock news doesn't cause any great insight in her. ...read more.