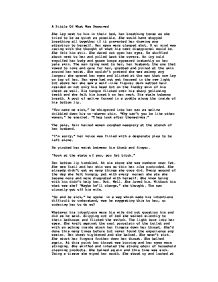 Short story 'A Little of What Was Deserved' with attached commentary

A Little Of What Was Deserved She lay next to him in their bed, her breathing tense as she tried to be as quiet as possible. She would have stopped breathing all together if it prevented her drawing any attention to herself. Her eyes were clamped shut. Her mind was racing with the thought of what his next disapproval would be. She felt him stir. She dared not open her eyes. He shuffled about next to her and pulled back the covers. An icy cold engulfed her body and goose bumps appeared instantly on her pale skin. The man lying next to her, her husband, the one that vowed to love and care for her, grabbed and pulled at the skin around her waist. She couldn't pretend she was asleep any longer; she opened her eyes and blinked at the man that now lay on top of her. Her eyes had not yet focused in the new light but above her she saw a wolf-like figure; dark matted hair resided on not only his head but on the flabby skin of his chest as well. His tongue flicked over his sharp yellowing teeth and she felt his breath on her neck. His stale tobacco breath. A pool of saliva formed in a puddle along the inside of his bottom lip. "You make me sick," he whispered into her ear as saliva dribbled down his un-shaven chin. ...read more.

There was a sudden bang and she jumped. Turning to see her box of cleaning products strewn across the floor. Bleach, dettol, some sort of pest deterrent, possibly rat poison, window cleaner, polish. It was as if she was being reminded of her role within the house. Her teeth dug into her lip and she was beginning to draw blood, the thin liquid dribbled down her chin, her grip tightened around the phone and her knuckles went white. She placed the phone back down, dabbed her lip and cleared up the products from the floor. Her eyes flicked over to the running water coming from the tap. He was out of the shower. Her life had been a waste. Something inside her clicked.All this time she spent trying to please him and it still hadn't been enough. She pushed all of her feelings aside and let a cold presence engulf her body. She didn't think. She just did. Finishing the cooking, she laid the table and poured a cold glass of lager for him and went into the living room explaining tea would be a few minutes late as she was planning something really special. He hit her hard on the face. "Maybe that will teach you to give me my tea at the right time hey," he sniggered. She blinked then walked mechanically back into the kitchen and searched for the ingredient that was going to make tea that extra bit special. ...read more.

the reader in the situation and make it more real for them and to give them a feel of what the characters are like. I also used some figurative language with the phrase 'wolf-like figure' this also contains connotations of shady, underhandedness, and is animalistic, describing the man as a wolf. The word 'snarled' is also used to describe him. This gives an impression of the character without actually going into detail. Angela Carter uses lots of symbolism and I tried to do the same. Cleaning products are mentioned throughout my story to act as a symbol of the woman's role in the house, or more what the mans belief the woman's role should be. Angela Carter also uses a lot of none standard punctuation which I have also tried to do to 'Clean. Iron. Cook. Clean. Iron. Cook' I used it here to create sound patterning, to quicken the pace and show the repetitiveness of her day. I used a few interrogatives within my story to involve the reader such as 'he spoke in a way which made his intentions difficult to understand, was he suggesting this to her, or ordering her to do so?' and 'would she look at the message?' These involve the reader and create more curiosity and suspense within the plot. I used simple sentences such as 'she didn't think' 'she froze' and minor sentences 'she just did' to create a faster pace and a variety to my sentence structure. Angela Carter often uses simple and minor sentences in her work. ...read more.