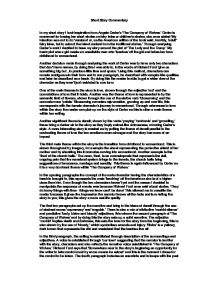 Short Story Commentary In my short story I took inspiration from Angela Carter's 'The Company of Wolves.' Carter is renowned for basing her short stories on fairy tales or children's stories, she once stated 'My intention was not to do 'versions' or, as the American edition of the book said, horribly, 'adult' fairy tales, but to extract the latent content from the traditional stories.' Through analysing Carter's work I decided to base my story around the plot of 'The Lady and the Tramp.' My basic plot was a girl meets an unsuitable man who 'leeches' off the girl and takes her from childhood to womanhood. Another decision made through analysing the work of Carter was to have only two characters that don't have names, by doing this I was able to, in the words of Richard Ford 'give us something big but...in precious little time and space.' Using this method, characters can remain ambiguous in their form and in one paragraph, be described with vampire-like qualities and later be described as a leech. ...read more.

In the opening paragraphs the concept of the male character having the characteristics of a leech is brought in, this represents the male 'leeching' off the female as she is of a higher class than him. Even though the two characters haven't yet met the reason I decided to manipulate the sequence of events was because Richard Ford once said about stories, 'They do funny things with time - things we know can't be done' This allowed me to unsettle the reader because it gives the impression the narrator knows all the facts and is re-telling the story to you; this gives the story a more real-life quality. The first two paragraphs set up the narrative and bring in the ideas of deceit through the use of abstract nouns 'supremacy' and 'anguish.' There is also a mix of attributive 'morbid silence' and predictive 'body, bistre and bloody' adjectives, this mirrors the second paragraph of 'The Company of Wolves' and by doing this the story sets up a solid narrative. ...read more.

The conclusion of my story is the tramp seducing the woman and the woman moving to adulthood by having sexual intercourse; this is similar to the ending in 'The Company of Wolves.' My story then goes on to describe the woman as 'breaking the seal' this represents when a leech is feeding off a victim, the only way they can be removed is by breaking the seal with a sharp object; this shows that the woman leaves the situation in control. I have decided to conclude in this way as I feel Carter's writing is feminist driven. When Carter wrote 'The Company of Wolves' in the 1980's, third-wave feminism was still a big issue, the view of society at the time is shown by the beginning of the story and the description of women being 'fawning, submissive and impossibly beautiful; their role subservient to their husband' this reflects the view some people in society still had. By the end of the story a new equilibrium is established where the woman is the one in control; this suggests the way society will view woman in future. 1114 words ...read more.