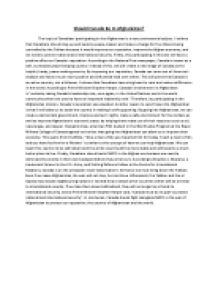 Should Canada Be In Afghanistan?

﻿Should Canada Be In Afghanistan? The topic of Canadians participating in the Afghan war is a very controversial subject. I believe that Canadians should step up and become peace-makers and make a change for the citizens being controlled by the Taliban because it would improve our reputation, improve the Afghan economy, and we need to protect national and international security. Firstly, this participating in this war will have a positive effect on Canada?s reputation. According to the National Post newspaper, Canada is known as a soft, outmoded peace-keeping country. Instead of this, we will create a new image of Canada as the helpful, hardy, peace-making country. ...read more.

Therefore, by participating in the Afghanistan mission, Canada?s reputation was elevated. Another reason to send troop into Afghanistan is that it will allow us to assist the country in making it self-supporting. By going into Afghanistan, we can create a democratic government, improve women?s rights, make a safe environment for the civilians as well as improve Afghanistan?s economic status by helping them make use of their resources such as oil, natural gas, and copper. Benjamin Zyla, a German PhD student in the War Studies Program at the Royal Military College of Canada agreed to the fact that going into Afghanistan can allow us to improve their economy. This quote from the Bible, ?Give a man a fish; you have fed him for today. ...read more.

According to Stephen J. Mariano, a Lieutenant Colonel in the U.S. Army, and Visiting Defence Fellow at the Centre for International Relations, Canada is on the al Qaeda?s most hated nation?s list hence we must bring down the Taliban. Even if we leave Afghanistan, the war will not stop, but continue. Afterwards, the Taliban and the al Qaeda may invade neighbouring nations in Central Asia or attack other countries which will be a threat to international security. If we take them down beforehand, they will no longer be a threat to international security, and as Prime Minister Stephen Harper said, ?Canada must do its part to protect national and international security?. In conclusion, Canada should fight alongside NATO in the war of Afghanistan to protect our reputation, the country of Afghanistan and the world. ...read more.