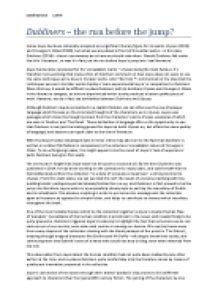 Should Dubliners fall under the title Literature, or was it in fact just the run before Joyces jump into real literature.

﻿Sarah Davison 12MH Dubliners ? the run before the jump? ________________ James Joyce has been nationally accepted as a significant literary figure for his works Ulysses (1922) and Finnegan?s Wake (1939), but when we are placed in front of his earlier works ? in this case, Dubliners (1914) ? there?s controversy as to how we should view them. Should Dubliners fall under the title ?Literature?, or was it in fact just the run before Joyce?s jump into ?real literature?. Joyce has become renowned for his ?unreadable? works ? Ulysses being the most famous. It?s therefore not surprising that many critics of Dubliners comment on how Joyce does not seem to use the same techniques as he does in his later works. John Thornton [1] commented on the idea that the techniques we see in his later works display a ?more experimental Joyce? in comparison to Dubliners. Were this true, it would be difficult to place Dubliners with its brothers Ulysses and Finnegan?s Wake in the literature category, as a more experienced writer surely produces a better quality piece of work. ...read more.

Joyce wrote in a purposefully dreary style to portray the monotony of Dublin and its inhabitants. This obvious sculpting in order to put across his message sets the collection apart as literature as opposed to simple fiction, and helps to contribute to themes which resurface throughout the book. One of the most notable themes which tie the collection together is Joyce?s coveted human flaw of ?paralysis?. Surveillance of the human condition is prominent in the novel, and reveals things to be quite gruesome. Dubliners triggered Joyce?s tendency to highlight the fact that as humans we do not venture out of our routine, even when said routine is causing our demise. We see the theme ooze from every chapter of the collection: starting with the literal paralysis of the priest in ?The Sisters?; weaving through trapped characters like Eveline and Mr Duffy ? refusing to break their cycles; and continuing even into Gabriel?s story of a horse who could not stop circling, even when removed from the mill. ...read more.

This problem of refusal to move forward is something that, due to its exact nature, will allow us never to escape. The collection will always be relatable, the novelty never wearing out, but rather being constantly renewed. Rather than concerning himself with problems like poverty and class - which are quite frankly as consistent as a British summer ? Joyce has chosen a concern which will prove utterly durable under the thumb of time. As literature, Dubliners will continue to influence the reader no matter which century he lives in. In short, Dubliners should absolutely be considered literature. Although it has been overshadowed by its brothers Ulysses and Finnegan?s Wake, it presents many of its own reasons to stand alongside them in the same category. Joyce has successfully sculpted the collection into an excellent quality publication, which broke new ground in fiction at the time and will continue to be regarded as a relatable and readable text for many years to come. By no means a run-up before a leap into literature, Dubliners is more than worthy of Harold Bloom?s canon. [1] John Thornton, Review of Dubliners, http://classiclit.about.com/od/joycejames3/fr/aa_dubliners.htm (accessed 25/06/2012) ...read more.