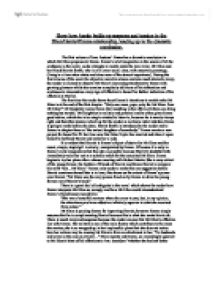 Show how Austin builds up suspense and tension in the Elton/Harriet/Emma relationship, leading up to the dramatic conclusion.

Show how Austin builds up suspense and tension in the Elton/Harriet/Emma relationship, leading up to the dramatic conclusion. The first volume of Jane Austens' Emma has a dramatic conclusion in which Mr Elton proposes to Emma. Emma's wild imagination is the source of all the confusion in the novel, as she attempts to match-make the local vicar, Mr Elton and her friend Harriet Smith, who is of a lower social class, with uncertain parentage, (living in a time when status and class were of the utmost importance). During the first volume of the novel the objective narrative stance contains much dramatic irony; the reader is allowed to observe Mr Elton's increasing attachment to Emma with growing pleasure whilst she remains completely oblivious of his infatuation and continues to misconstrue every sign of affection to herself as further indication of his affection to Harriet. The first time the reader hears about Emma's intentions to match-make Mr Elton is at the end of the first chapter- "Only one more, papa; only for Mr Elton. Poor Mr Elton!" Mr Knightley warns Emma that meddling in the affairs of others can bring nothing but trouble. ...read more.

Tension is increased after Emma cunningly (but good- heartedly) manipulates Harriet into refusing Mr Robert Martin's proposal- the reader knows Mr Martin is a good suitor for Harriet but has to watch as Emma's snobbery compels her to influence the subservient Harriet. Mr Knightley visits Emma to tell her Mr Martin intends to propose to Harriet, unaware the event has already occurred; "...I have good reason to believe your little friend will soon hear of something to her advantage." The reader experiences anticipation because we already know what has a happened. Mr Knightley is very angry at Emma's interference and guesses her plans for Harriet and Mr Elton and warns her against them, "Elton will not do." Emma is made uneasy by her quarrel with Mr Knightley but once again ignores his good advice, which infuriates the reader. Austen makes us aware of Mr Knightley's astute judgement throughout the novel, this helps to build the mounting tension. The event of the charade is full of ambivalence and the situation is almost hilarious. Mr Elton provides a riddle of love for the two girls' book. It is clearly written as a statement of love for Emma, and as she is so delighted when she tells him that she wrote it in their book, he perceives it as a sign of encouragement. ...read more.

However, even after this Emma still keeps us anticipating her much awaited comprehension, initially assuming he is drunk; "Mr Elton, the lover of Harriet, was professing himself her lover." Mr Elton is oblivious to Emma's dismay, shock and anger and continues his declaration in earnest and it takes Emma a long time to convey her refusal. Mr Elton protests that he never thought of Miss Smith in any other way than her friend, and that all his attentions had been towards her, that he believed himself to have been encouraged by Emma. The conversation grows more heated as Mr Elton insists he could never consider marrying at the 'level' of Harriet's social status. "I have no thoughts of matrimony at present" Emma bluntly refuses him and "He was too angry to say another word", an outraged silence ensues until the carriage reaches the vicarage and he makes his escape. Austen uses many techniques to create tension and suspense in the lead up to the dramatic and powerful conclusion of the Emma/ Harriet/ Mr Elton situation, including a lot of ambiguity and ambivalence and much irony from the narrative voice. I think Mr Knightley is also a useful tool because he tries to warn her with the truth and we know he is correct and have confidence his opinion, but Emma is so stubborn and determined that she ignores him. ...read more.