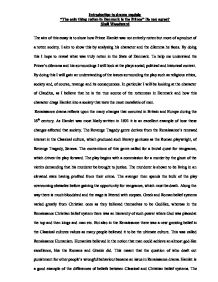 Show how Prince Hamlet was not entirely rotten but more of a product of a rotten society.

Introduction to drama module "The only thing rotten in Denmark is the Prince" Do you agree? Shell Woodward The aim of this essay is to show how Prince Hamlet was not entirely rotten but more of a product of a rotten society. I aim to show this by analysing his character and the dilemma he faces. By doing this I hope to reveal what was truly rotten in the State of Denmark. To help me understand the Prince's dilemma and his surroundings I will look at the plays social, political and historical context. By doing this I will gain an understanding of the issues surrounding the play such as religious ethics, society and, of course, revenge and its consequences. In particular I will be looking at the character of Claudius, as I believe that he is the true source of the rottenness in Denmark and how this character drags Hamlet into a society that tests the most moralistic of men. Renaissance drama reflects upon the many changes that occurred in Britain and Europe during the 16th century. As Hamlet was most likely written in 1601 it is an excellent example of how these changes affected that society. The Revenge Tragedy genre derives from the Renaissance's renewed interest in the Classical culture, which produced such literary geniuses as the Roman playwright, of Revenge Tragedy, Seneca. ...read more.

To give the world assurance of a man This was your husband" Act 3, scene 4, lines 53-63 "He took my father grossly, full of bread, With all his crimes broad blown as flush as May; And how his audit stands, who know safe heaven?" Act 3, scene 3, lines 80-82 By making Hamlet speak of his father in both Christian and Renaissance Humanism values, Shakespeare has highlighted Hamlet's religious confusion. By doing this he also leaves it to the audience to decide which set of values holds the most importance, making them understand the dilemma that Hamlet faces even more as it was a dilemma they too were facing. In the first quote Shakespeare has used an abundance of similes to compare his father to the Gods, giving the audience the notion that Hamlet senior lives on in a god-like state. This would enable Hamlet to justify seeking revenge, as he too would be considered to be in a God-like state. In the quote below this Hamlet uses Christian values, saying that Claudius killed his father before he had had the chance to repent his sins on earth so his soul would be clean to enter heaven, reflecting that Hamlet senior could be in h**l. By doing this Shakespeare highlights the fact that God alone should carry out justice. In his book called, 'Shakespeare and the Renaissance concept of honour', Curtis Brown Watson states that, "In recent years critics such as S.N Bethell, Wilson ...read more.

He searches for evidence to back his theory that Claudius is the source of rottenness so he is able to kill him and rid Denmark of all its rottenness. If, like Knight states, Hamlet were inhuman he would not hesitate in getting his revenge as much as he does and he would not question all the different religious belief systems. In The Short Oxford History of English Literature, Andrew Sanders states that, " Hamlet's public problem is how to avenge a political murder in a culture where private vengeance is politically and morally unacceptable" (page 157). I disagree with Andrew Sanders as I have collected evidence that shows that in the Renaissance there were groups that strongly believed that humans were god-like, thus able to carry out revenge. I do not think it was totally morally unacceptable in this society to seek revenge and I believe the Shakespearean audience would have been aware of this. Shakespeare has provided the clues for Hamlet and the audience in the plays imagery. The play is fuelled by images of poison, rot and decay. This is enveloped in the theme of illusion verses reality. Things appear in the play to be true and honest but the reality is that they are infested with evil. Shakespeare has included a lot of imagery that is related to the bible, particularly Genesis. This creates a different theme in the play, one of inherited sin and corruption. Humans are fallen creatures, victims of the devils trickery, according to Genesis. ...read more.