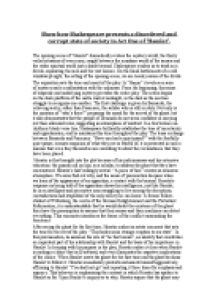 Show how Shakespeare presents a disordered and corrupt state of society in Act One of Hamlet.

﻿Show how Shakespeare presents a disordered and corrupt state of society in Act One of ?Hamlet?. The opening scene of ?Hamlet? dramatically evokes the mystery world, the thinly veiled situation of every man, caught between the mundane world of the senses and the wider spiritual world just a shade beyond. Shakespeare renders us to tread on a divide, separating the seen and the vast unseen. On the bleak battlements of a cold windswept night, the setting of the opening scene, we are keenly aware of the divide. The exposition sets the tone and mood of the play. In ?Hamlet? it evokes an aura of mystery and a confrontation with the unknown. From the beginning, this sense of suspense and underlying mystery pervades the entire play. The action begins on the stark platform of the castle wall at midnight, in the dark as the sentries struggle to recognize one another. The first challenge is given by Barnardo, the relieving sentry, rather than Francisco, the solider who is still on duty. ...read more.

Horatio's response on being told of the apparition shows his intelligence, just like Hamlet, he is an intelligent and perceptive man struggling to live among the deceptions, contradictions and stupidities of the only society he can know. A former fellow-student at Wittenberg, the centre of the German Enlightenment and the Protestant Reformation, it is understandable that he would doubt the existence of the ghost they have the presumption to assume that their senses and their machines can detect everything. This encounter introduces the theme of the conflict surrounding the Renaissance. After seeing the ghost for the first time, Horatio makes an astute comment that sets the tone for the rest of the play: ?This bodes some strange eruption to our state?. In this proclamation, he assumes the role of ?he that knows?, an identity that constitutes an important part of his relationship with Hamlet and the basis of his importance in Hamlet. In keeping with his purpose in the play, Horatio makes it clear when Hamlet is making a choice that is ill-advised, and even illuminates the negative implications of the choice. ...read more.

After the ghost's appearance, the guards ask Horatio the reason for the war preparations; his answer introduces the first of the four parallel actions in the play. The former king of Norway, Fortinbras, had been killed by Hamlet's father in single matched combat, and had also forfeited lands to the conqueror under the terms of a formal agreement. Now his son is the first character in the play who seeks to avenge a father's death. The reference to Julius Caesar introduces the sense of self awareness in the play which is so crucial an element of Hamlet?s own examination of theatricality and its connection with ?reality?. But it also serves dramatically to remind the audience that the good of people might sometimes require the assassination of an autocrat, as Caesar?s killers claimed. Horatio tells Bernardo and Marcellus that in ancient Rome just before Julius Caesar was assasinated "The graves stood tenantless and the sheeted dead/Did squeak and gibber in the Roman streets." The appearance of the ghost is a bad omen and Horatio warns that something evil will soon befall the nation, for young Fortinbras of Norway in violation of an earlier treaty is about to invade Denmark. ...read more.