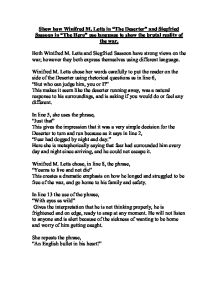 Show how Winifred M. Letts in

Show how Winifred M. Letts in "The Deserter" and Siegfried Sassoon in "The Hero" use language to show the brutal reality of the war. Both Winifred M. Letts and Siegfried Sassoon have strong views on the war; however they both express themselves using different language. Winifred M. Letts chose her words carefully to put the reader on the side of the Deserter using rhetorical questions as in line 6, "But who can judge him, you or I?" This makes it seem like the deserter running away, was a natural response to his surroundings, and is asking if you would do or feel any different. In line 5, she uses the phrase, "Just that" This gives the impression that it was a very simple decision for the Deserter to turn and run because as it says in line 2, "Fear had dogged by night and day." Here she is metaphorically saying that fear had surrounded him every day and night since arriving, and he could not escape it. ...read more.

A lot of his words mean the opposite to their literal meaning. For example, in line 8, "Some gallant lies" Means the son in the poem was made out by the Senior Officer, who wrote the letter, to be someone, a war hero, which he was not. As in line 10, "Her weak eyes" He is referring to the mother of the sons eyes being filled with tears, they were also weak because she was old, and knew if she opened them fully she would surely cry, and the image of her being proud of her son would be gone. She would look weak to the Brother Officer. Sassoon uses alteration to add emphases to the poem. For example in line 17, "Blown to small bits" And line 12, "Brimmed with joy Because he's been so brave, her glorious boy." Most of his alliteration is "B" I think is due to the letter "B" being hard, aggressive and bold. ...read more.

This also gives the interpretation he did not have many friends. In conclusion, both "The Hero" and "The deserter" use language to show the brutal reality of the war, by basing their poems on real events that would have happened during the war. In "The Deserter" soldiers did try to escape and as a result ended up blindfolded against the wall being shot by English soldiers, many even their own friends. Letts makes the reader feel regret and sorrow for his death, as like any of the soldiers he had no choice but to join the army. The language in the poem was rhetorical, truthful and hard hitting, as you put yourself in his shoes. In "The Hero" Mothers and wives got letters from colonel's everyday with lies about how great and brave their sons were. Sassoon's gentle words at the start of the poem makes you feel sad for the old lady. However, as you go through the poem you get to know her son through the Brother Officer as what a coward he was, the language reflects this by using harsh alliteration and cruel words describing the son. ...read more.

The points in this essay are relevant; however they are made in a very simplistic way and are under developed. Links need to be made between the texts in more detail and similarities and differences identified and explored.