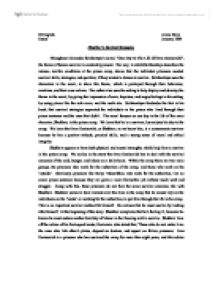 IB English James Heim Essay January, 2004 Shukhov's Survival Strategies Throughout Alexander Solzheitsyn's novel, "One Day In The Life Of Ivan Denisovich", the theme of human survival is constantly present. The way, in which Solzhenitsyn describes the intense, terrible conditions at the prison camp, shows that the individual prisoners needed survival skills, strategies, and qualities, if they wanted a chance to survive. Solzhenitsyn uses the characters in the novel, to show this theme, which is portrayed through their behaviour, reactions, and their own actions. The author also uses the setting to help display and develop the theme in the novel, by giving the impression of eerie, hopeless, and angry feelings in his setting, by using places like the sick room, and the work site. Solzhenitsyn forebodes the fact in his book, that survival strategies separated the individuals in the prison who lived through their prison sentence and the ones that didn't. The novel focuses on one day in the life of the main character, Shukhov, in the prison camp. We learn that he is a survivor, by analysis his day in the camp. We learn that Ivan Denisovich, or Shukhov, as we know him, is a consummate survivor because he has a positive attitude, practical skills, and a strong sense of moral and ethical integrity. Shukhov appears to have both physical and mental strengths, which help him to survive in the prison camp. ...read more.

We realise this, because when Shukhov goes to the mess hall in the afternoon, whilst he's drinking the thin soup, all his complaints and concerns disappear. In the day in which we learn about Shukhov, we see that Shukhov risks punishment from the camp authorities in his deception to grab extra bowls of gruel, however he does this only because he has his sight set on getting an extra bowl for himself. Shukhov also risks being punished for keeping a metal blade, which he picked up earlier in the day. When waiting in line to help Tsezar, he comes very close to the point where the metal piece is detected by the guard during the body search process. He wonders whether he should drop the metal piece, however to him it is more tempting to take the risk and keep it as such a tool could earn him extra bread if he were to trade it with a fellow prisoner. Taking risks is part of Shukhov's survival strategies. He takes the risks just for the chance that he might get a bit of extra food for himself. Tsezar, a fellow prisoner of the grand squad 104, receives regular food parcels through some mysterious connections, and these parcels make him the envy of the gang. Shukhov is always eager to help to please Tsezar in anyway, like to wait in line for his parcels, just for the possibility that he will get a few rations of food from him. ...read more.

Even though it might not be obvious to Shukhov himself, this dreaming of his family helps him survive his prison sentence in the camp, as it keeps him mentally stable. Although Shukhov does not think or comment about religion throughout the majority of the novel, his final conversation with Alyoshka, a devout Baptist, reveals that faith can be a means of survival in the oppressive camp system. Shukhov's interest in his discussion with Alyoshka of God, faith and prayers, shows that Shukhov's sense of inner peace in the last paragraph of the story, resembling Alyoshka's sense of inner peace throughout the novel, forebodes the idea that religious faith can offer strength to survive in the prison camp. At the beginning of the novel, Shukhov start the day off feeling ill, however he still gets through the day. Not only does he makes the most of his day, but he also survive it. We only learn about one day in the life of Ivan Denisovich, and the author tries to stress the fact that Shukhov has to undertake his survival strategies, and skills, everyday, for his whole ten-year life sentence. In portraying Solzhenitsyn's theme of survival, he tries to express that only the best survived in the soviet prisoner camps. They were not places for weak people. You had to believe in yourself, and be fit mentally and physically to survive, and have the personality qualities, which Shukhov had in the novel. ...read more.