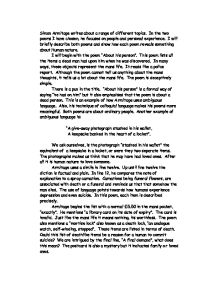 Simon Armitage writes about a range of different topics. In the two poems I have chosen, he focuses on people and personal experience. I will briefly describe both poems and show how each poem reveals something about Human nature. I will begin with the poem "About his person". This poem lists all the items a dead man had upon him when he was discovered. In many ways, these objects represent the mans life. It reads like a police report. Although the poem cannot tell us anything about the mans thoughts, it tells us a lot about the mans life. The poem is deceptively simple. There is a pun in the title. "About his person" is a formal way of saying "he had on him" but it also emphasises that the poem is about a dead person. This is an example of how Armitage uses ambiguous language. Also, his technique of colloquial language makes his poems more meaningful. Both poems are about ordinary people. Another example of ambiguous language is: "A give-away photograph stashed in his wallet, A keepsake banked in the heart of a locket". ...read more.

His whole life shown by the list, everything. The poem is structured in rhyming couplets. It is short and precise and consists of 10 "two line stanza's". The poem has a simple form. The poet uses imagery e.g. The photo in his wallet leads us to imagine that he had loved ones. The "carnations" make us imagine a memorial service. We are born and than we die, it is nature. "No gold or silver" but a mark where a ring had once been indicates a failed relationship. He was being selfish if, he had committed suicide but we are still sympathetic. The poem gives a pessimistic outlook on life. The poem is sad, mourning and depressing. There isn't much feeling but there is a lot of meaning. The tone is deadpan. There is a slow rhythm to indicate death and sorrow. The rhyming within couplets gives an air of finality and completeness. The poem "I am very bothered" is written differently. It is like a direct confession. The colloquial language used is very appropriate. There is not much rhyme in this poem. ...read more.

The poem begins with and slow sorrowful rhythm but speeds up towards the end. There is a pleading, sorrowful and emotional tone. The first stanza is a bout the planning of what he will do. It is almost as if he takes a deep breath before he starts the second stanza where he actually carries out the "experiment". It describes what he does and what happens. The third stanza is about his regrets. The poem reads like a script and there is some rhyme. As I mentioned before the word naked gives us two different images, as does the word "eternity". Is a sign of never-ending love but we may also think of eternity rings. The poem goes from the writer finding enjoyment in what he did to his confession of what he did. The poem is an example of human nature i.e. The boy loves the girl, is uncapable of showing his feelings and so he hurts her. It seems ironic but it happens. This poem reveals that people make mistakes and usually the want forgiveness. Armitage's use of language has helped reveal a lot about human nature particularly in the second poem, which is quite typical, of what a thirteen year old boy might do to gets a girls attention. By Marian McCrory 12A2 ...read more.