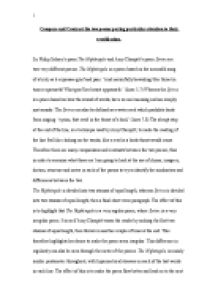 ﻿Compare and Contrast the two poems paying particular attention to their versification. Sir Philip Sidney?s poem The Nightingale and Amy Clampitt?s poem Syrinx are two very different poems. The Nightingale is a poem based on the mournful song of a bird, as it expresses grief and pain: ?And mournfully bewailing/ Her throat in tunes expresseth/ What grief her breast oppresseth.? (lines 5-7) Whereas the Syrinx is a poem based on how the sound of words, have no real meaning and are simply just sounds. The Syrinx can also be defined as a water reed which prohibits birds from singing: ?syrinx, that reed/ in the throat of a bird,? (lines 7-8) The abrupt stop at the end of the line, is a technique used by Amy Clampitt, to make the reading of the line feel like choking on the words, like a reed in a birds throat would cause. Therefore there are many comparisons and contrasts between the two poems, thus in order to examine what these are I am going to look at the use of rhyme, imagery, diction, structure and metre in each of the poems to try to identify the similarities and differences between the two. The Nightingale is divided into two stanzas of equal length, whereas Syrinx is divided into two stanzas of equal length, then a final short verse paragraph. ...read more.

Therefore the later mention of a thorn: ?Thy thorn without, my thorn my heart invadeth.? (line 12) Could be seen as a biblical reference to Christ and the crown of thorns. This image of a thorn represents pain not just physical but emotional. As if the speaker possibly Philomela?s sister, feels betrayed by Philomela, like how Jesus was betrayed by the Jews. Therefore the speaker does not just refer to the imagery of a sharp thorn causing great physical pain. Instead the mention of a thorn is as a biblical reference symbolising betrayal and emotional pain, which creates strong imagery as to the grief and anguish the speaker is suffering. Syrinx on the other hand, presents a different view of the meaning behind a bird?s song than The Nightingale. Amy Clampitt has made it clear in her poem Syrinx, that she is not interested with metre and rhyme. Instead she has purposely made her rhyme, metre and layout all irregular to emphasise that a bird?s call can mean nothing at all. The Nightingale focuses on a deep meaning behind a bird?s song. However, Syrinx focuses on the fact that a bird?s call is meaningless, yet it is the sounds that are important. The first three lines express this: Like the foghorn that?s all lung, The wind chime that?s all percussion, Like the wind itself, that?s merely air (lines 1-3) ...read more.

However, when the speaker then says, ?my thorn my heart invadeth.? We picture Philomela?s sister telling us that her pain has come from her own blood. That her sister Philomela has ruined her marriage and invaded her heart leaving an eternal pain of heart break. In summation, Sir Philip Sidney?s poem The Nightingale and Amy Clampitt?s poem Syrinx represent two very contrasting views. The Nightingale is a very well ordered poem; it is laid out in two stanzas of equal length and has a regular rhyme scheme and metre. This all helps emphasise the deep and meaningful song of the Nightingale as it expresses grief and anguish. However, Syrinx is a very irregular poem, it is laid out in two equal stanzas with a final short verse paragraph and it has no rhyme or predominant metre. This is all emphatic of the meaning behind the poem, that a bird?s song has no real meaning it is just a set of sounds and nothing more. However, despite this, both poems have links to classical mythology, as well as both being about birds and their songs. Both poems also seem to have some roots in the subjection of females to the threat of r**e by overbearing males. Hence they lose their voice literally but also with regards to personal freedom. ...read more.