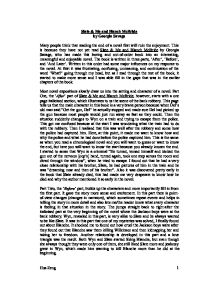 Slate &amp; Me and Blanch McBride by Georgia Savage - review.

Slate & Me and Blanch McBride by Georgia Savage Many people think that reading the end of a novel first will ruin the enjoyment. This is because they have not yet read Slate & Me and Blanch McBride by Georgia Savage, who has made this boring and out-of-order book into an interesting, meaningful and enjoyable novel. The book is written in three parts, 'After', 'Before', and 'And Later'. Written in this order had some major influences on my response to the novel. At first it was frustrating, confusing, unmeaning, and continuation of the word 'What?' going through my head, but as I read through the rest of the book, it started to make more sense and I was able fill in the gaps that was in the earlier chapters of the book. Most novel expositions slowly draw us into the setting and character of a novel. Part One, the 'After' part of Slate & Me and Blanch McBride, however, starts with a one page italicised section, which illustrates to us the scene of the bank robbery. ...read more.

Also it was discovered pretty early in the book that Slate already died, this had made me very desperate to know how he died and why the author mentioned it so early in the novel. Part Two, the 'Before' part, builds up the characters and more importantly fill in from the first part. It gave the story more sense and excitement. In this part there is point-of-view changes (changes in narrators), which sometimes repeat events and helps in telling the story in more detail and also lets me/the reader know what every character is feeling in that situation in the story. The jumps straight back to right after the italicised part at the very beginning of the novel where the Jackson boys were at the bank robbery. Wyn, revealed in this part, is very alike to Slate and he always wanted to be like Slate. It was in this part that one of my mysteries was solved, I finally found out about Blanche. ...read more.

This shows that she still likes him. Here I find out that Renshaw had hired a guy to keep an eye on Blanche. It is here where I realise that Renshaw is like a 'father' to Blanche. With the way the book was written I thought that Wyn would just escape and just keep going with his life but instead he was shot dead. Slate & Me and Blanche McBride was an enjoyable read. The storyline was reasonable but when it is not in chronological order, it turned out to be a suspenseful, exciting, and adventurous story. As a result of it being in non chronological order there were a lot of jumps and gaps during the read, these were great because it got me thinking to what would happen next or how will it resolve. I hope in future I could find another one of the books written in non-chronological order so I could compare the both and see what techniques were used to make it into such an interesting story. Hua Zeng 1 ...read more.