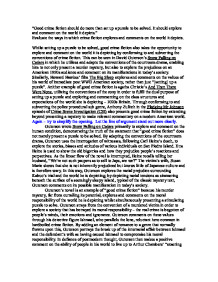 "Good crime fiction should do more than set up a puzzle to be solved. It should explore and comment on the world it depicts." Evaluate the ways in which crime fiction explores and comments on the world it depicts. Whilst setting up a puzzle to be solved, good crime fiction also takes the opportunity to explore and comment on the world it is depicting by conforming to and subverting the conventions of crime fiction. This can be seen in David Guterson's Snow Falling on Cedars in which he utilizes and adapts the conventions of the courtroom drama, enabling him to not only present a murder mystery, but also to explore the prejudices on an American 1950s audience and comment on its manifestations in today's society. Similarly, Howard Hawkes' film The Big Sleep explores and comments on the values of his world of immediate post WWII American society, rather than just "[setting] up a puzzle". Anither example of good crime fiction is agatha Christie's And Then There Were None, utilizing the conventions of the cozy in order to fulfil the dual purpose of setting up a puzzle and exploring and commenting on the class structures and expectations of the world she is depicting - 1020s Britain. Through conforming to and subverting the police procedural sub genre, Anthony Zulitch in the Pledging Mr Johnson episode of Crime Scene Investigation (CSI) also presents good crime fiction by extending beyond presenting a mystery to make relevant commentary on a modern American world. Again - try to simplify the opening. ...read more.

Whilst Marlowe typifies the conventional film noir detective in some respects - "I was fired for insubordination" - the close relationship he enjoys with Bernie Ohls the policeman is clearly a subversion from the sub genre and is used by Hawkes to comment on society's expectations that the authorities work together to achieve justice. A mid shot allows responders to appreciate their familiarity as they share information about the Sternwoods. While film noir traditionally ends with more questions than it begins with, Hawkes ensures that his text is "good crime fiction" by commenting on the positive atmosphere of hispost World War II 1940s audience by incorporating romance and a happy ending. In the final scene, an establishing shot shows Vivian and Marlowe standing close to each other. "You've forgotten one thing," Vivien reminds him as he draws together the solutions of the complex plot, "me." The responder is then positioned to appreciate their expectant faces as Marlowe asks "What's wrong with you?" "Nothing you can't fix" is the answer as romantic music overrides the reality of a police siren. Through these subversions of film noir, Hawkes is able to produce "good crime fiction" by commenting on both the bleakness and the optimism of the world he is depicting.Do more with the conflict within Marlowe. Discuss more how the sleuth is both corrupted by his environment and how he rises above it. Similarly, Agatha Christie in her novel And then There Were None whilst primarily presenting a puzzle to be solved, explores and comments on the class structures and expectations of her world, middle class 1920s Britain. ...read more.

Post production animation allows the responder to appreciate the intricacies and therefore the accuracies of the forensic investigation process. The composer of CSI explores and comments on modern america's world of crme and insecurity rather then just presenting a puzzle; it is this ability to deliver relevant commentary about the world he is depictingthat makes Zulitch's CSI an example of "good crime fiction". Very general - you need more quotes and specific reference. What concerns of society are raised in the chosen episode. You are dealing far more with appeal of the series than the issues raised in the particular show. Through conforming and subverting the crime fiction genre, composers are able to create texts of "good crime fiction" by not restricting themselves to setting up a puzzle to be solved; they also explore and comment on the world they depict. Guterson's Snow Falling on Cedars, I adapting the courtroom drama, is able to explore racial prejudice and comment on the contradictions of its manifestation in today's society as well as our values of moral responsibility. In Hawkes' The Big Sleep, the exploration and commentary provided on the violence yet optimism of post WWII America makes it a good crime fiction text. Similarly, Christie's abi;lity, not only to present a puzzle but also to explore the values of her world - middle class 1920s Britain, as well as Zulitch's abilty to explore and comment on modern America's expectations, make them good crime fiction. You have to source the texts of your own choosing fully. This is better than the first one I marked but it still can be better. ...read more.